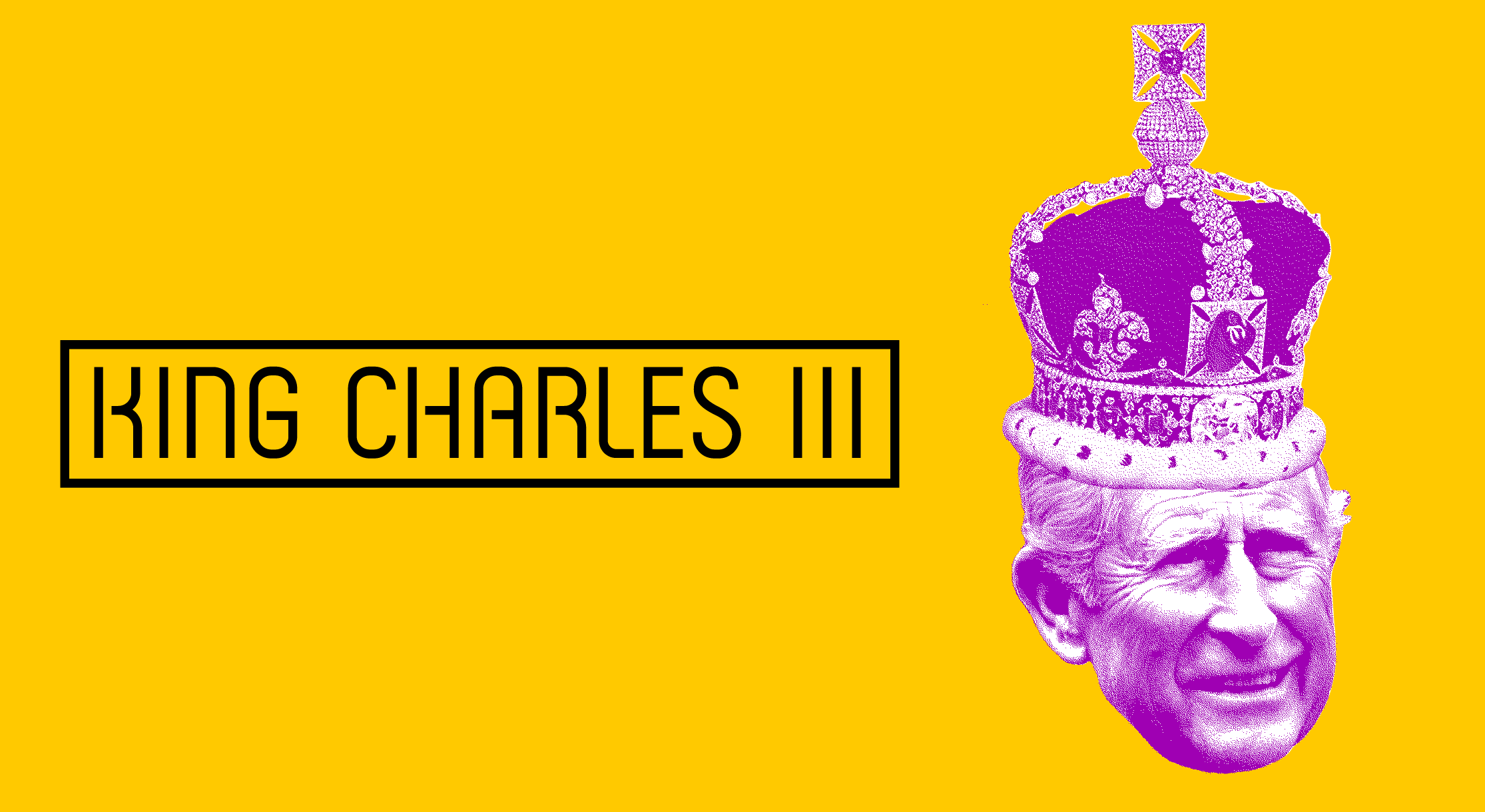 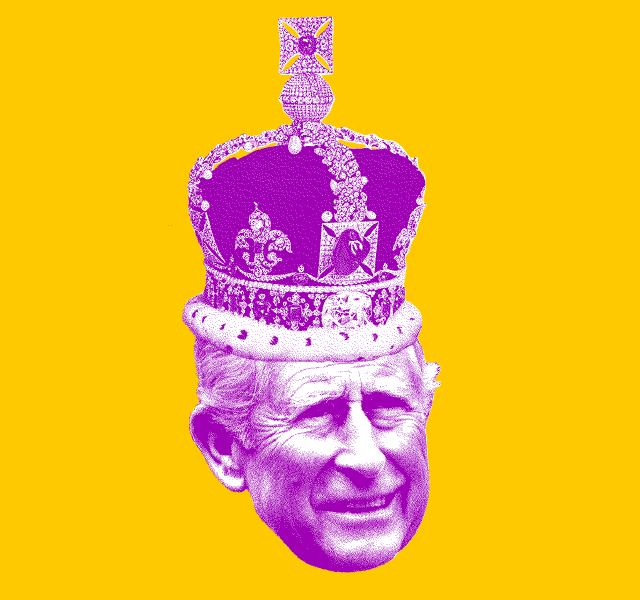 November 8 — December 3
The Queen is dead. After a lifetime of waiting, the prince ascends to the throne. A future of power. But how to rule? Camilla, William, Kate and Harry join Charles in Mike Bartlett’s “future history play,” exploring the people beneath the crown. The Los Angeles premiere of the 2015 Olivier Award-winning best new play. A contemporary Shakespearean drama.

The Queen is dead. After a lifetime of waiting, the prince ascends to the throne. A future of power. But how to rule? Camilla, William, Kate and Harry join Charles in Mike Bartlett’s “future history play,” exploring the people beneath the crown. The Los Angeles premiere of the 2015 Olivier Award-winning best new play. A contemporary Shakespearean drama. 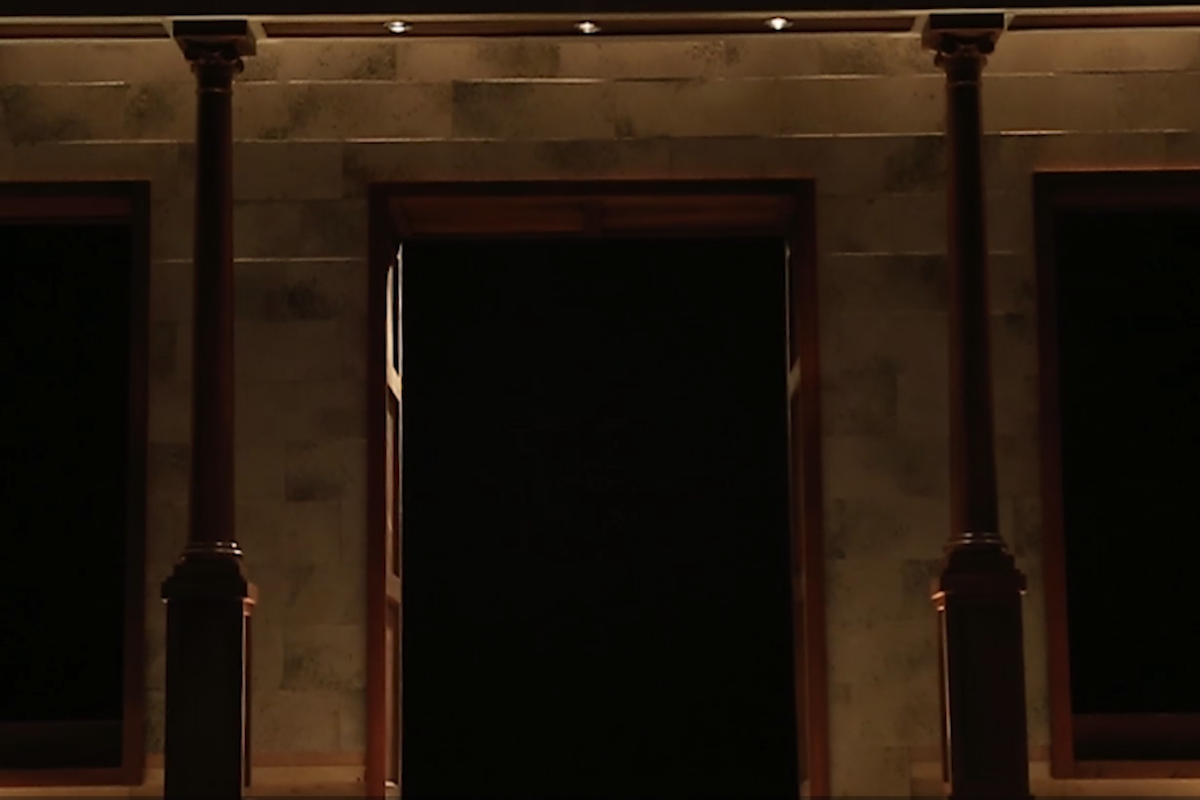 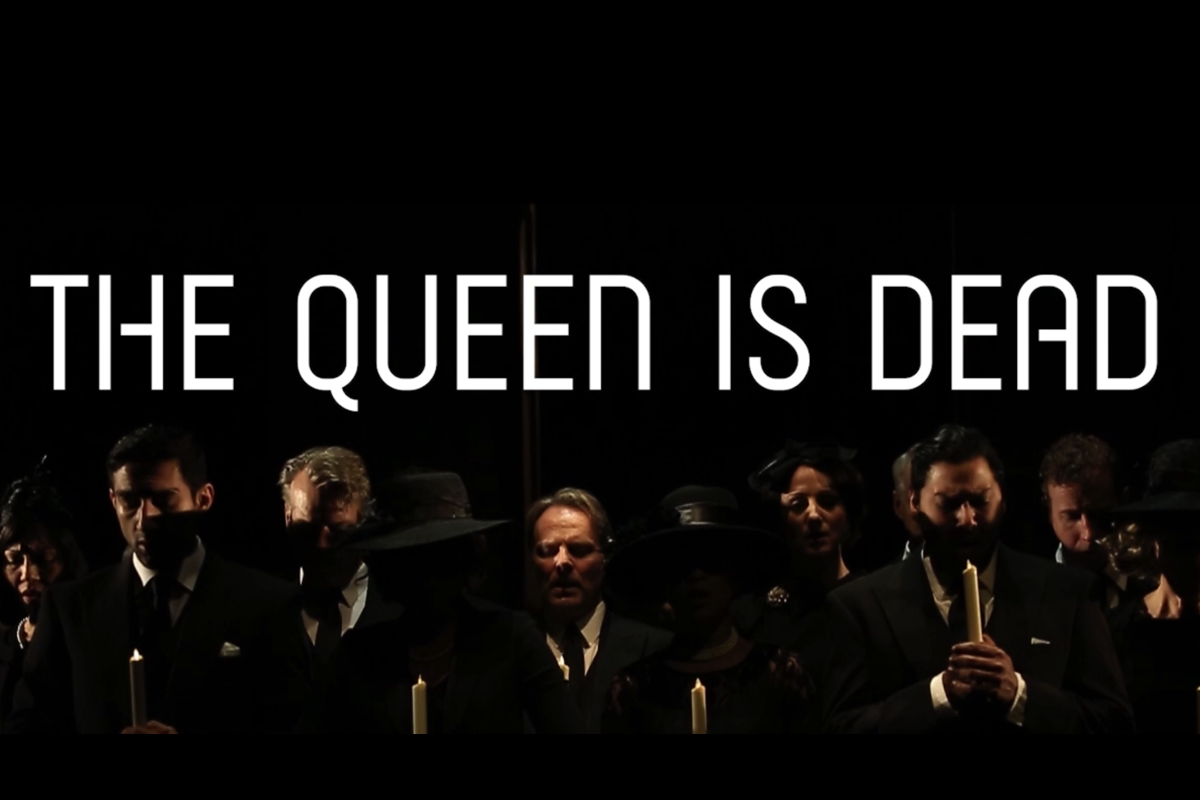 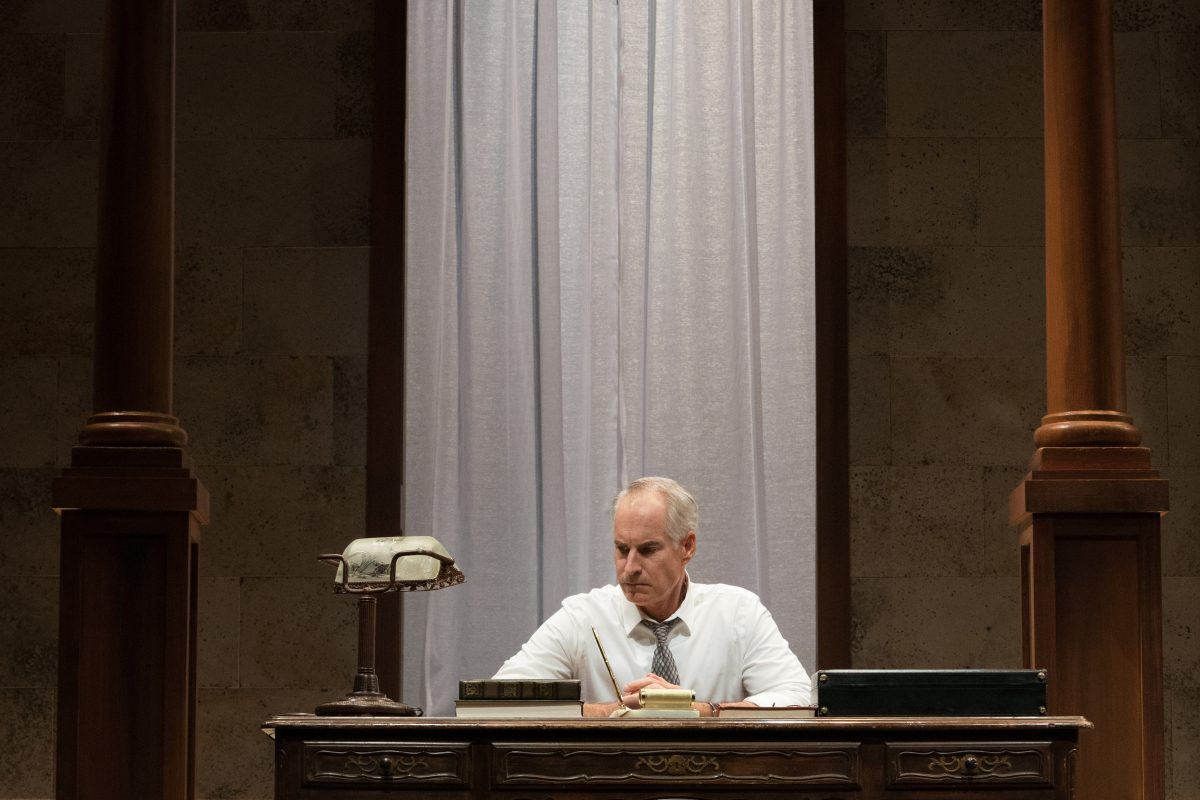 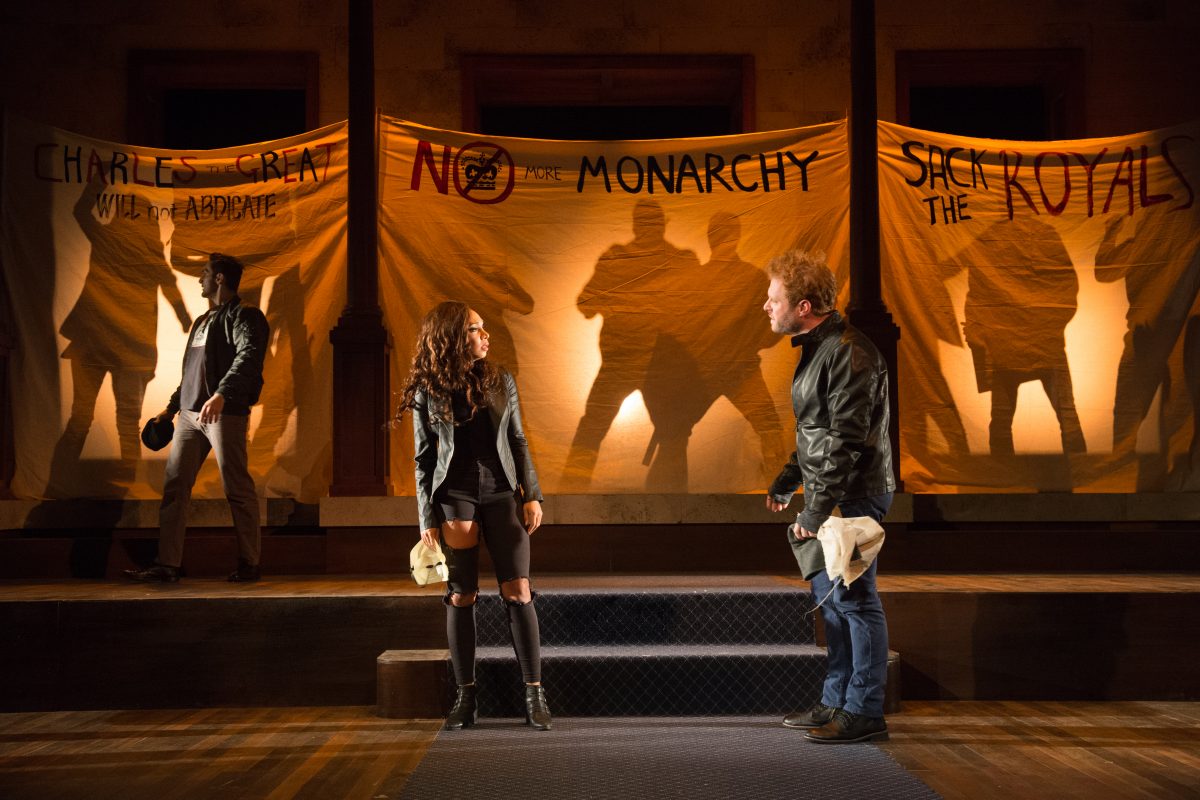 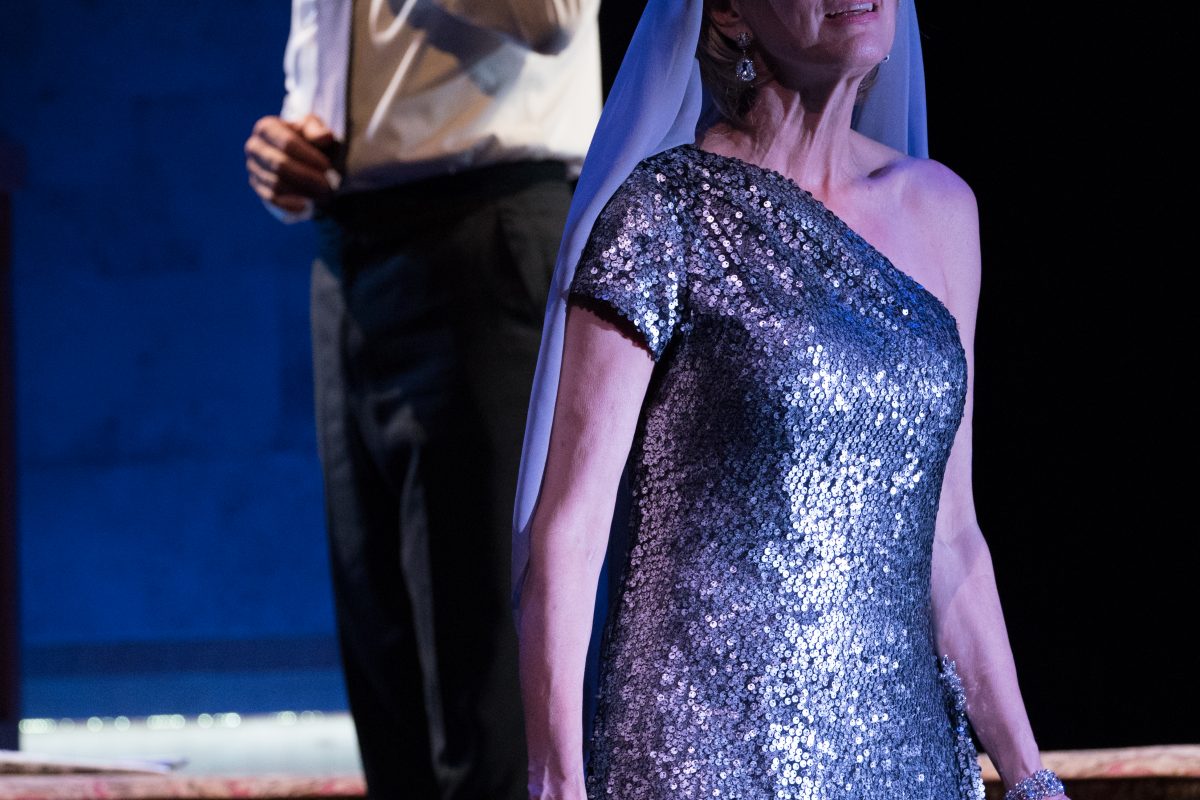 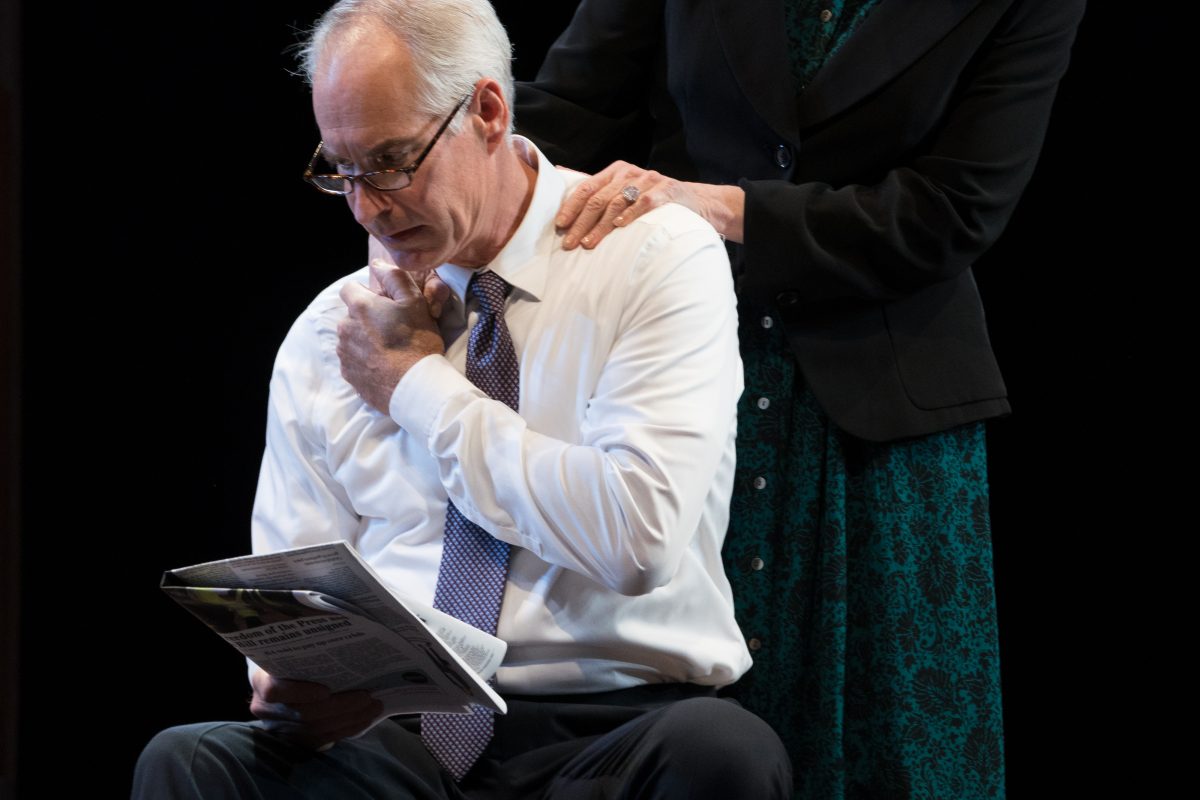 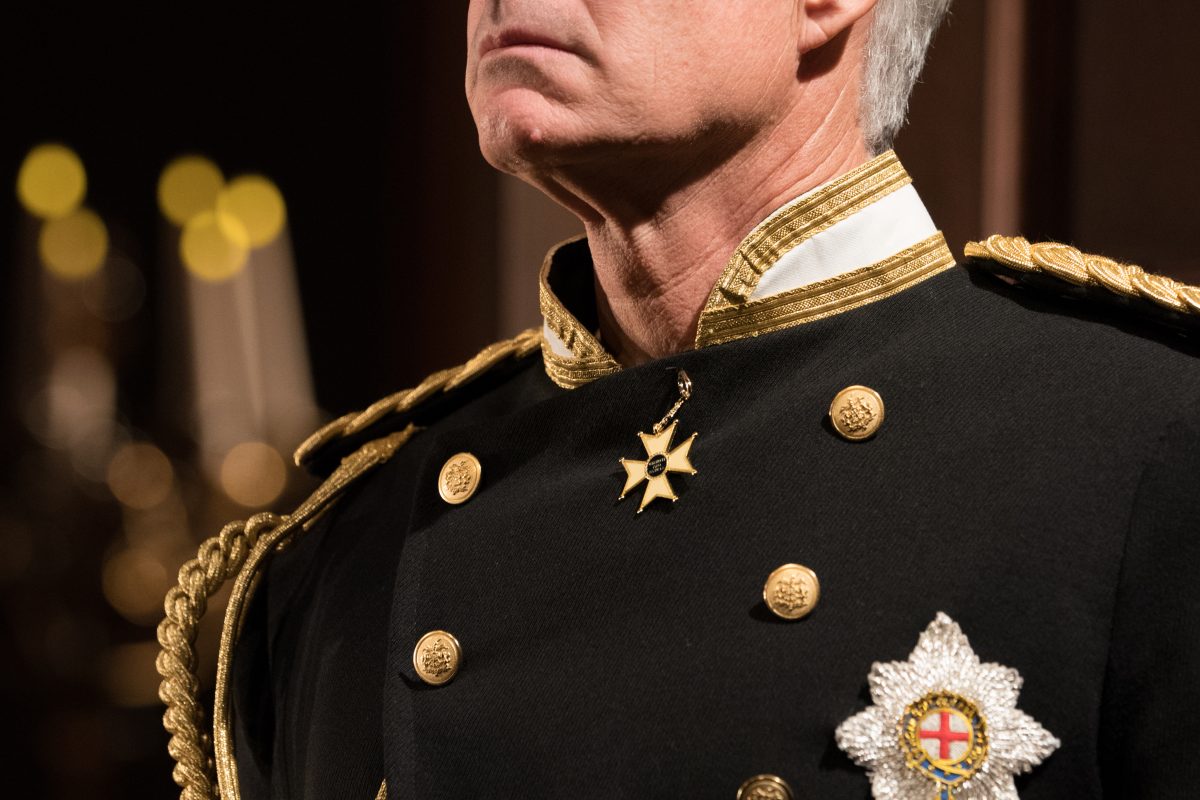 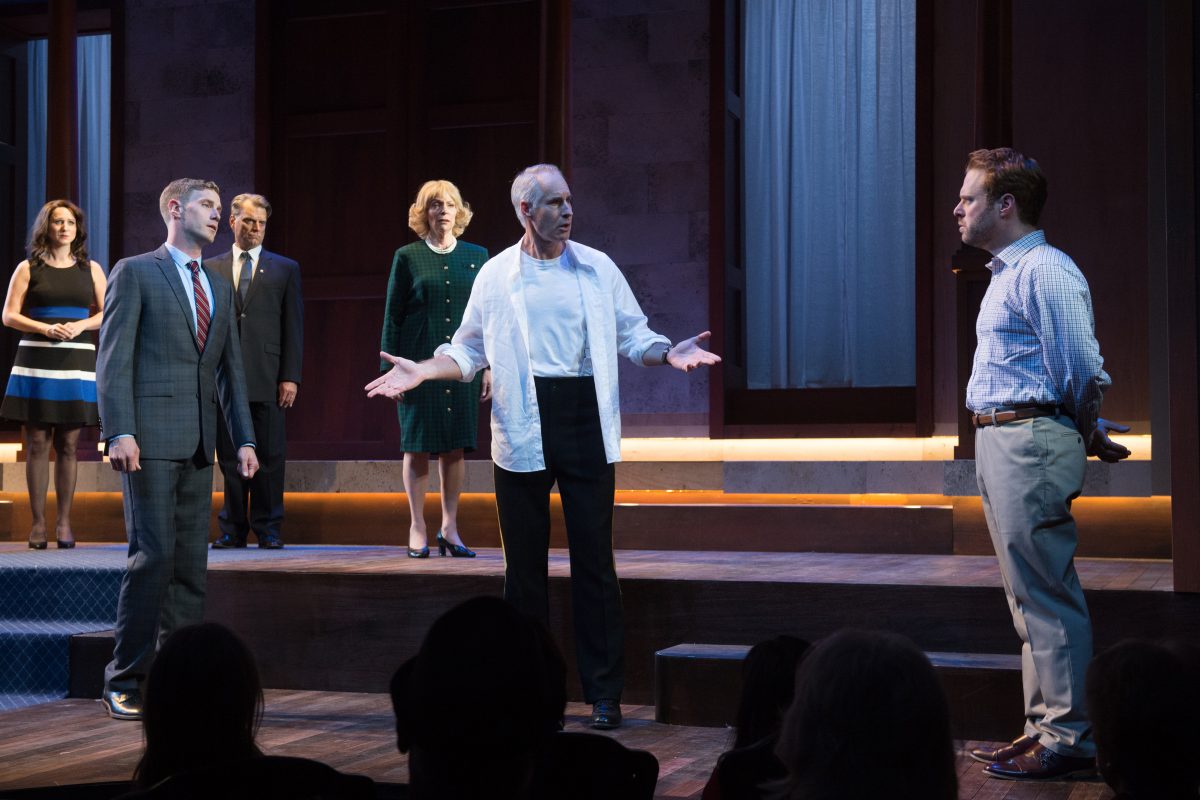 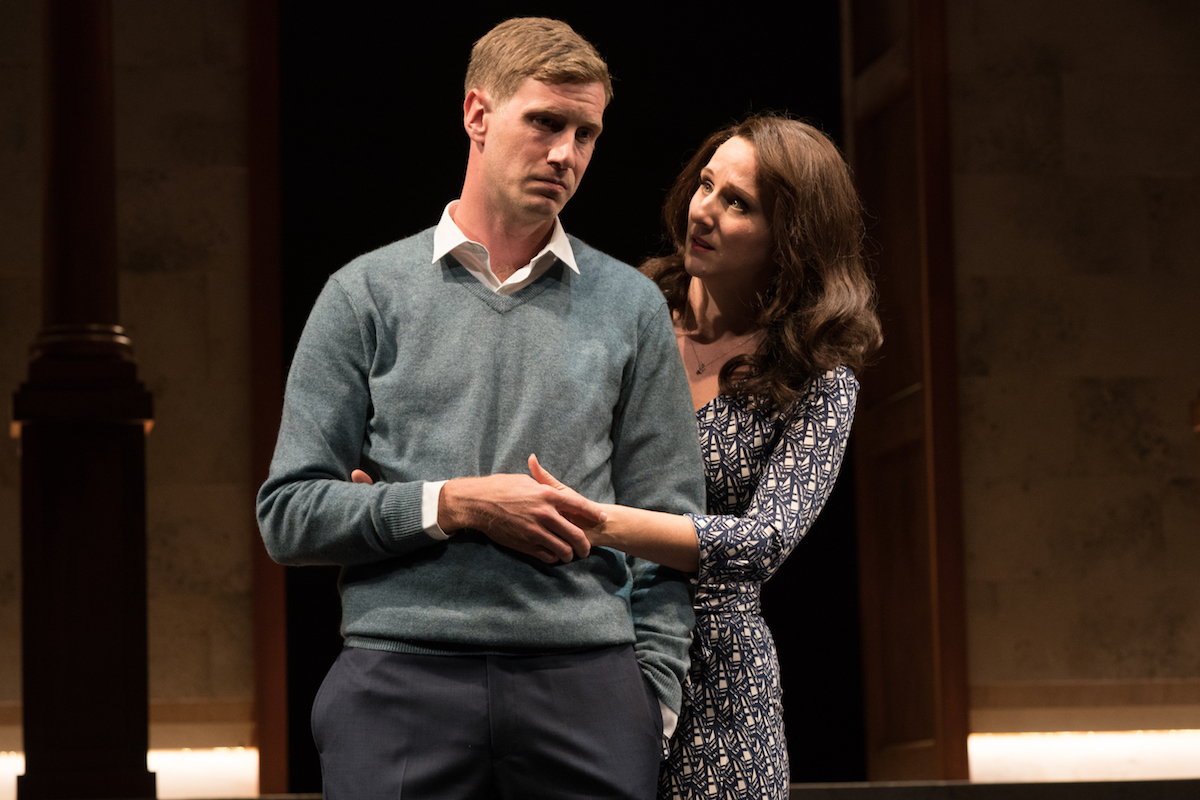 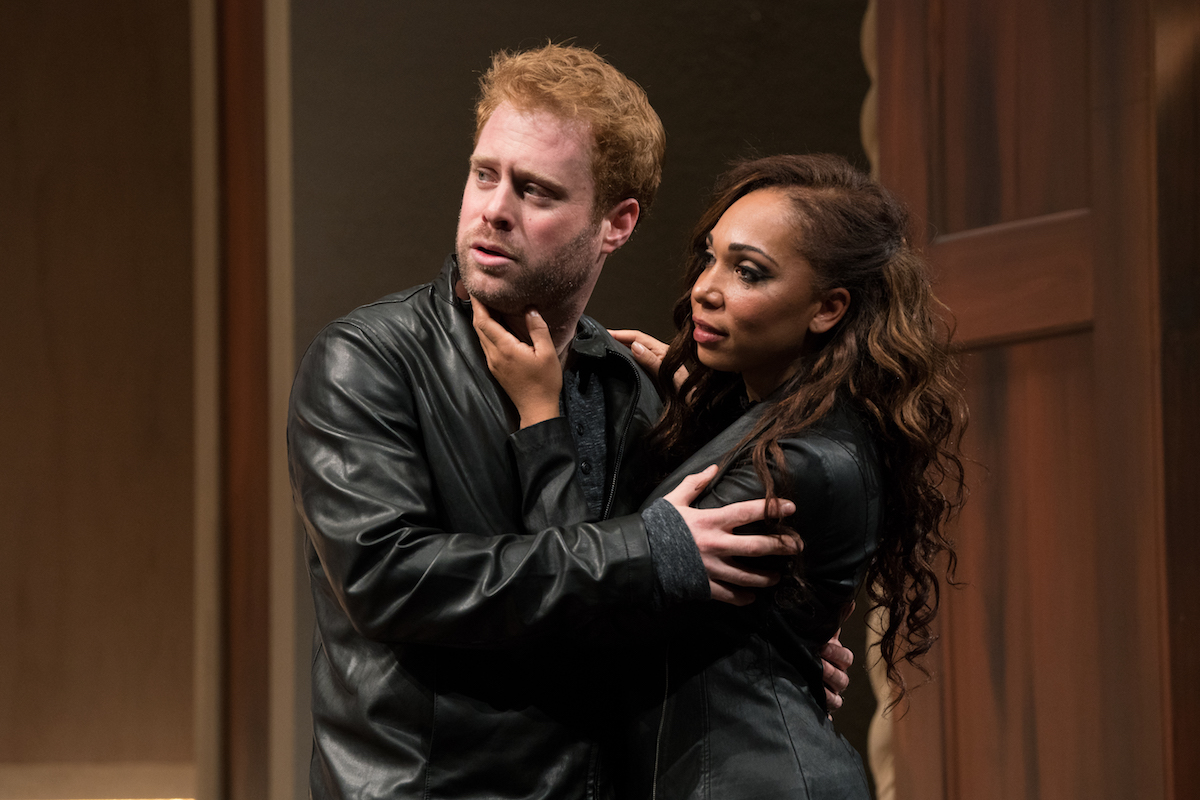 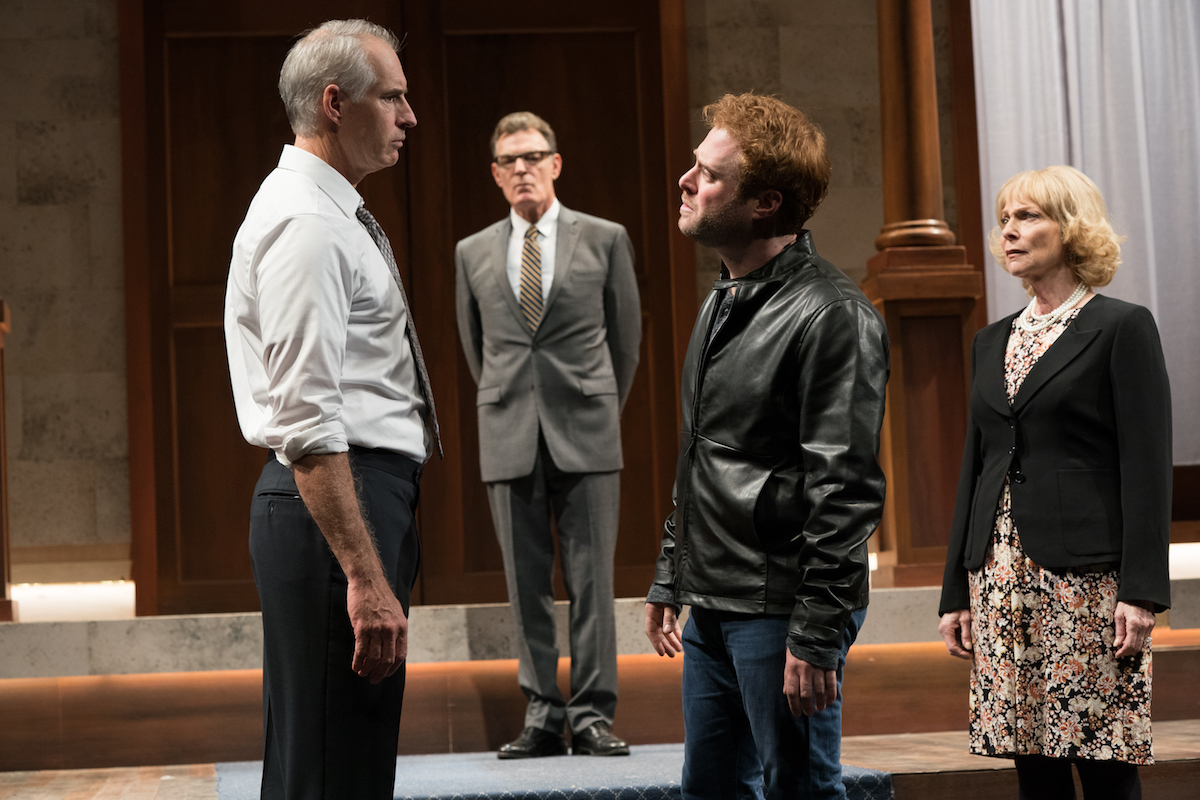 is making his Pasadena Playhouse debut in King Charles III. Broadway productions include Sir Peter Hall’s An Ideal Husband and the New York and Off Broadway premiere of Miss Evers’ Boys. Regionally he has played Hamlet at the Dallas Shakespeare Festival and has appeared in two summer Shakespeare seasons and The Constant Wife at The Old Globe Theatre. TV & Film: “Skyline,” “The Thomas Crown Affair,” “Colony,” “Feud: Bette and Joan,” “The Orville,” “Star Trek Voyager, Deep Space Nine and Enterprise,” and “Frasier.” Paul is an Audiobook Narrator with over 500 titles available.

Pasadena Playhouse: Equus (Frank), Light Up The Sky (Carlton), Noises Off (Lloyd at Marines Memorial), Sherlock Holmes (Sherlock), and Casa Valentina (cover). Trained at RADA and joined the Royal Shakespeare Company in London. Toured India and Southeast Asia with Shakespeare and Shaw. Received a Theatre World Award for On Approval (George) at The Roundabout. Appeared in dozens of productions throughout the U.S. and U.K. Rehearsed Cleo (Rex Harrison) at the Alley Theatre in Houston but was caught in Hurricane Harvey and postponed until Spring 2018. Film & TV: “The Empire Strikes Back,” “Titanic,” and a slew of TV.

is delighted to return to the Playhouse where she was last seen in Casa Valentina. She most recently appeared in the world premiere of Yoga Play (South Coast Repertory). Other theatre credits include: The Jewel Theatre, The Kinetic Theatre, PICT Classic Theatre, The Old Globe, The Mark Taper Forum, Shakespeare Festival LA, ACT (Seattle), the Berkeley Repertory Theatre, Shakespeare Santa Cruz, The Berkeley Shakespeare Festival, and the American Conservatory Theatre. TV credits include “Modern Family,” and a recurring role on “Desperate Housewives.” She has an MFA from the American Conservatory Theatre. Next up: Directing Pinter’s The Hothouse at the Antaeus Company.

Read More
Debut. Most recently seen in Robert Schenkkan’s Building The Wall at the Fountain Theatre. Also South Coast Rep., La Mirada, A Noise Within, The Geffen, Boston Court, and many others. NY and regionally: The Lucile Lortel, The Century Theater, The Pearl Theater, The Shakespeare Theater, Vienna’s English Theater, The Long Wharf, Baltimore Center Stage, Playmakers Rep, The Old Globe, Tale Rep, and many more. Numerous film and television credits including Robert McNamara in the HBO movie, “All The Way.” He is a graduate of UCLA and received his Masters at The Yale School of Drama.

is thrilled to return to the Pasadena Playhouse where she appeared in Isn’t It Romantic, The Fourth Wall, and Other People’s Money. Los Angeles credits include: Tainted Blood (The Road) also directed by Michael Michetti, Razorback (Rogue Machine) and Fighting Words (Celtic Arts Center). She appeared on Broadway in Smile, Off Broadway in The Cocktail Hour, national tours and regional theatre. Some TV credits include: “Outcast,” “Criminal Minds,” “Fresh Off The Boat,” “Doubt,” and “Castle.” She is on the faculty at Howard Fine Acting Studio. Online: lauragardner.org

Couldn’t be more pleased to return to Pasadena Playhouse in King Charles III. Past theatrical productions include: Viola in Twelfth Night (PCPA), Betty Boop 5 in Collective Rage (Boston Court), and ensemble in Pygmalion (Pasadena Playhouse). TV: “24” (recurring), “The Unit,” and “Lie to Me.” Film: “Kill Your Darlings,” and “The Russian Doll.” Sarah would especially like to thank Michael Michetti for hiring her on her first Equity contract, her close friends who have really shown up in the past year (you know who you are) and her family for their undying support and love.

is thrilled to be making his Pasadena Playhouse debut in King Charles III. Theatrical productions include Pure Confidence, 2, You Can’t Take It With You and A Bright Room Called Day. On TV: “House,” “Grey’s Anatomy,” “How To Get Away With Murder,” “Scorpion,” Get Shorty,” American Crime: Versace.”

is thrilled to be returning to the Playhouse in King Charles III. Selected regional and local credits include: Three Days in the Country, King Charles III, Abundance, The Whipping Man, Prometheus Bound, The Nether, The Great Divide, The Government Inspector, Dark Plays or Stories for Boys. Adam has won or been nominated for Ovation, LA Drama Critics, LA Weekly and Broadway World awards. Adam can also been seen on the Disney Channel’s “Bizaardvark’s.” He is a founding member of Poor Dog Group: premiering Group Therapy at CAP/UCLA in January. He’s eternally grateful to Cookie.  Online: poordoggroup.com

is pleased to perform at Pasadena Playhouse for the first time in King Charles III. Regional credits include Constellations (TheatreWorks SV), world premieres of No More Sad Things, The Uncanny Valley, A Nighttime Survival Guide, and Narwhal! Unicorn of the Sea, all at Boise Contemporary Theatre, punkplay (Clubbed Thumb) and many Shakespeare plays from coast to coast. TV: “Criminal Minds.” Carie is a graduate of Occidental College and The Academy for Classical Acting at George Washington University.

Born in El Paso Texas, Abe lived until he was 8 with his parents and his maternal grandparents in Ciudad Juárez, Mexico, eventually moving to New Mexico. In 2012 Abe played the male lead in the world premiere of Paloma, which ran in both Albuquerque and Santa Fe, New Mexico, eventually going to LA and NYC. Abe left New Mexico after being awarded a scholarship to attend USC School of Dramatic Arts. In May 2016 Abe received his MFA in acting. Recent credits include: Mickey in “Good Girls Revolt” (Amazon), as well as “Frontera,” “Frank,” and “Transcendence.”

is currently Associate Playwright at Paines Plough. In 2011 he was Writer in Residence at The National Theatre and in 2007 he was Pearson Playwright in Residence at the Royal Court Theatre. His play Love, Love, Love won Best New Play in 2011 Theatre Awards UK and his play Cock won an Olivier Award in 2010 for Outstanding Achievement in an Affiliate Theatre; he won the Writer’s Guild Tinniswood and Imison prizes for Not Talking and the Old Vic New Voices Award for Artefacts. Theatre credits include: Love, Love, Love, 13 (National Theatre), Decade (co-writer) Earthquakes in London, Cock, Contractions, Artefacts and My Child. Radio credits include: The Core, Heart, Liam, The Steps, Love Contract, Not Talking and The Family Man all on BBC. Screen credits include “Earthquakes in London” and “Hometown.” Directing credits include Honest by DC Moore. He is currently under commission from Headlong Theatre. Liverpool Everyman and Playhouse, Hampstead Theatre, and The Royal Court Theatre.

is artistic director of the Pasadena Master Chorale and the Los Angeles Daiku and Artist in Residence with the LA Choral Lab. He has directed choirs on four continents and in August he conducted an all-Beethoven program with over 300 performers in the Walt Disney Concert Hall. He is the songwriter on “Luna Around The World,” a forthcoming animated series on PBS, and an active composer. Previously, Bernstein was director of choral music at Occidental College, assistant conductor of the Pasadena Symphony and associate musical director for the national tour of Cats. Online: jeffreybernsteinmusic.com

[redmore title=”Read More”]Pasadena Playhouse: Our Town. Off Broadway: A Sucker Emcee, The Way West, Empanada Loca, and A Family for All Occasions (Labrynth Theater). Regional: Hedwig and the Angry Inch and Merrily We Roll Along. Feature Film & TV Production Design: “John Wick 2” (reshoots), “Permission,” and “She’s Lost Control.” Art Direction: “Only the Brave,” “Westworld s2,” “Birdman,” and “The Wolf of Wall Street.” Currently he is Art Directing the film “Backseat,” about Dick Cheney. David studied Architecture and Theater at Syracuse University and received his MFA in Production Design at NYU/Tisch. Online: davidmeyerdesign.com[/readmore]

is excited to be returning to design another production at Pasadena Playhouse. She last designed wigs/makeup here on Twist: An American Musical and holds this theater near to her heart. Her other regional theater credits include: Stage Kiss, Wait Until Dark, Citizen Twain any many others.

is happy to return to the Playhouse, having previously directed Mamet’s A Life in the Theatre starring Hal Holbrook. Co-Artistic Director of The Theatre @ Boston Court in Pasadena: Stupid F**king Bird, Paradise Lost: Shadows & Wings, his own adaptation of A Picture of Dorian Gray, and The Twentieth-Century Way (also Off-Broadway at Rattlestick Playwright’s Theatre). Elsewhere: the world premiere of Robert Schenkkan’s Building the Wall (Fountain Theatre), District Merchants (South Coast Rep), Mrs. Warren’s Profession, Figaro, and The Grapes of Wrath (A Noise Within), Kiss Me Kate, Carousel, and Man of La Mancha (Reprise).

Founded in 2008 by director Jeffrey Bernstein, Pasadena Master Chorale is a vital and innovative part of Pasadena’s cultural landscape. An auditioned volunteer choir, PMC is dedicated to fostering a love of the choral art through performance and education. Recent highlights: Handel’s Messiah, Faure’s Requiem, Brahms’ Unbound. Annually, through its “Listening To The Future” program, PMC presents a concert of music by local high school composers. In 2017 PMC was awarded second place in the American Prize competition. PMC is proud to receive support from the City of Pasadena and the LA County Arts Commission. Online: pasadenamasterchorale.org

Select a date in the calendar or email our box office at boxoffice@pasadenaplayhouse.org

Please Note: This production includes the smoking of herbal cigarettes.