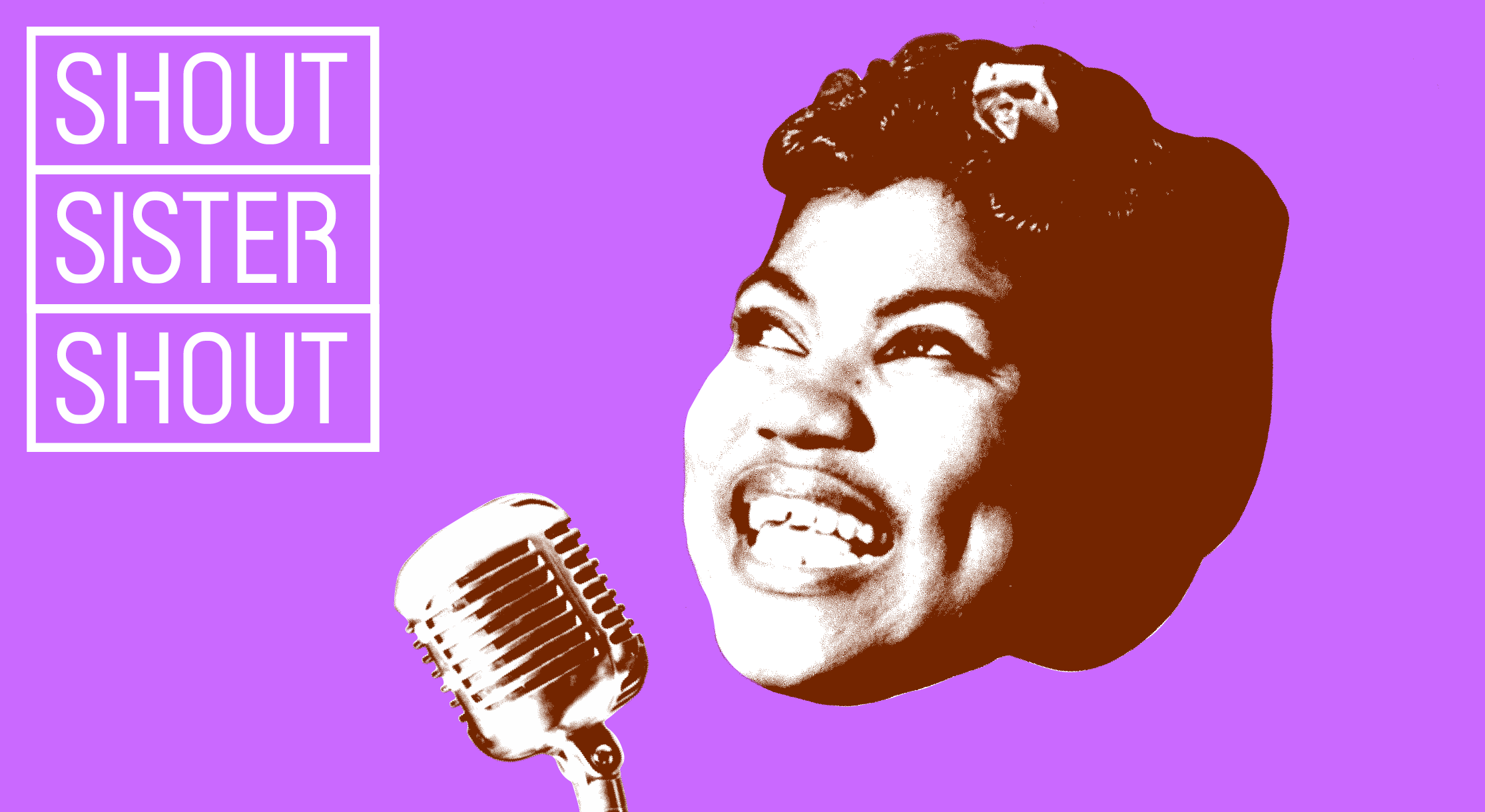 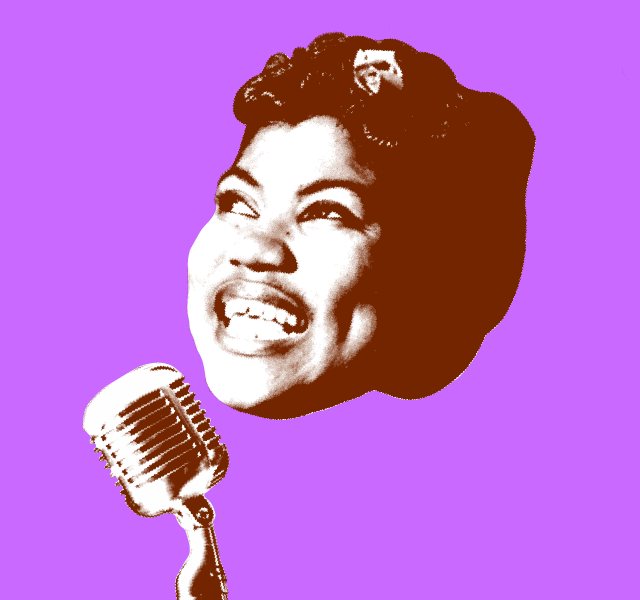 This project is supported in part by an award from

Arrive early and get the full-throttle theater experience at Shout Sister Shout! Pose and play with new Gibson guitars, snap a photo in the Gibson guitar throne, hear live music and more.

The Gibson Guitar exhibit features over 20 new models of Gibson Epiphone Guitars and is available for a “test drive” or photo opportunities in the Friendship Center. And, exclusively on display is Gibson’s famous Guitar Throne: an 8-foot replica throne of Gibson Les Paul Guitars.

The Gibson Guitar Interactive Experience is generously provided by Gibson Brands, of the world’s leading music and audio lifestyle companies.

Nic Harcourt, regarded as an ultimate “tastemaker” in music and has been credited with launching the careers of Adele, Coldplay, The Black Keys, Norah Jones and others, will curate one-hour of music inspired by Sister Rosetta Tharpe.

Engage in lively dialogue with artists and renowned experts after Shout Sister Shout!

Gayle Freda Wald, writer of Shout, Sister, Shout!: The Untold Story of Rock and Roll – the book that sparked the musical. 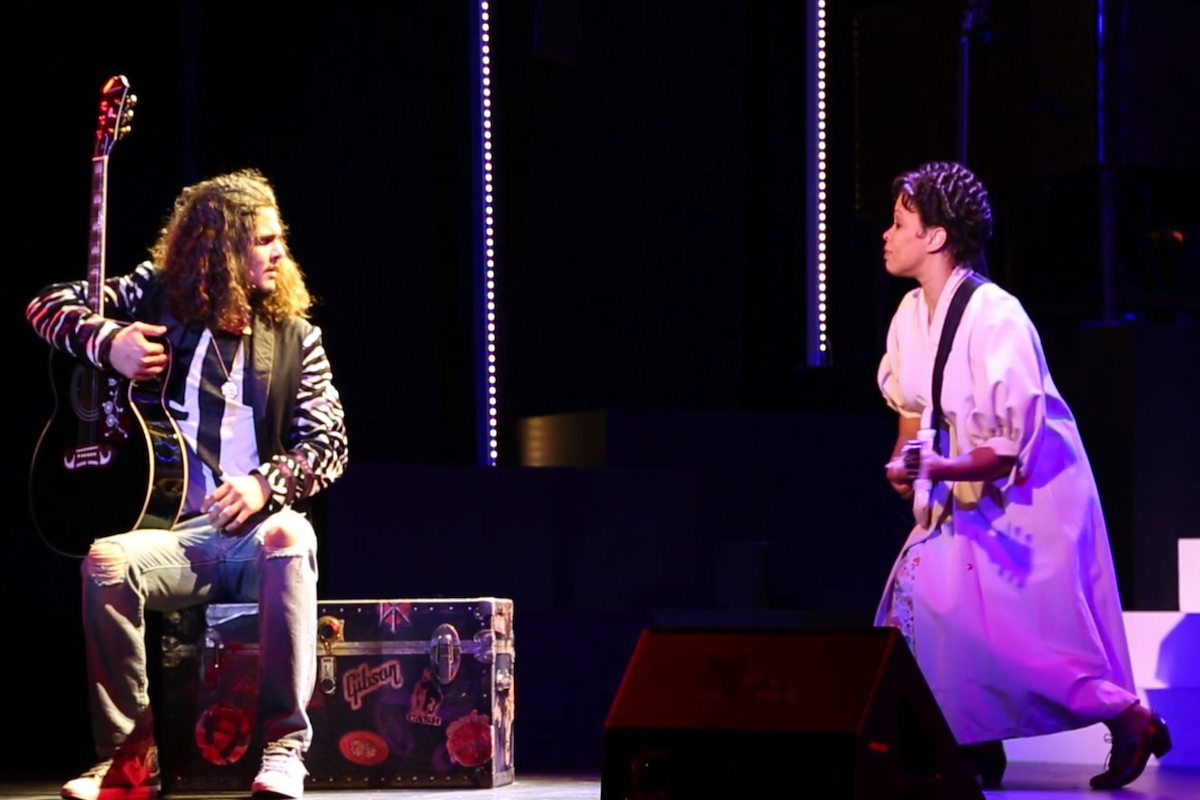 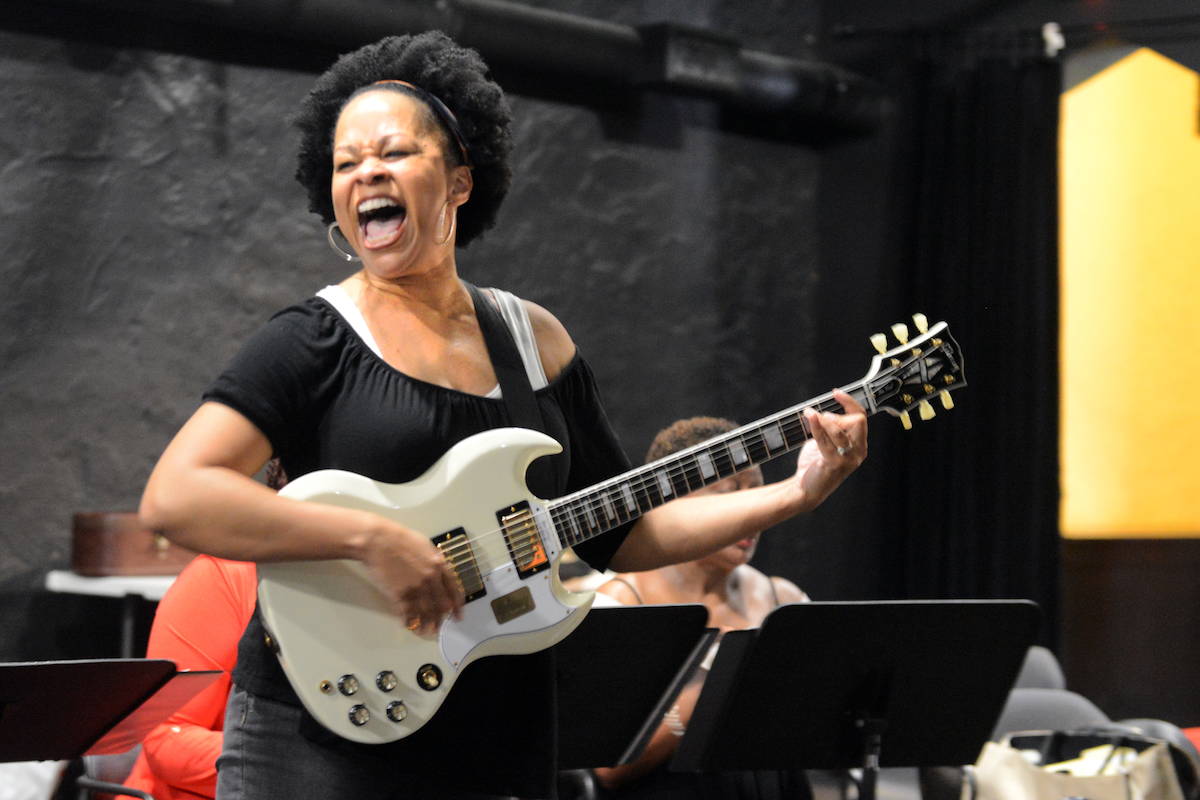 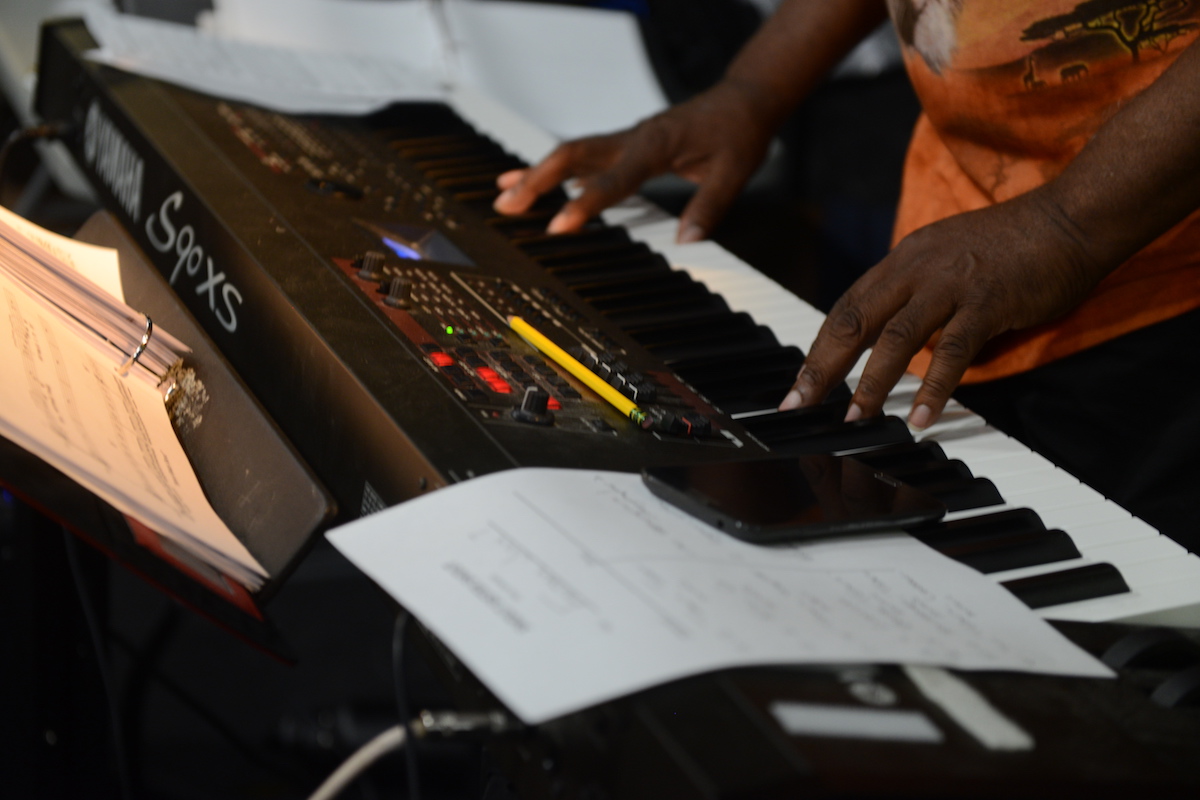 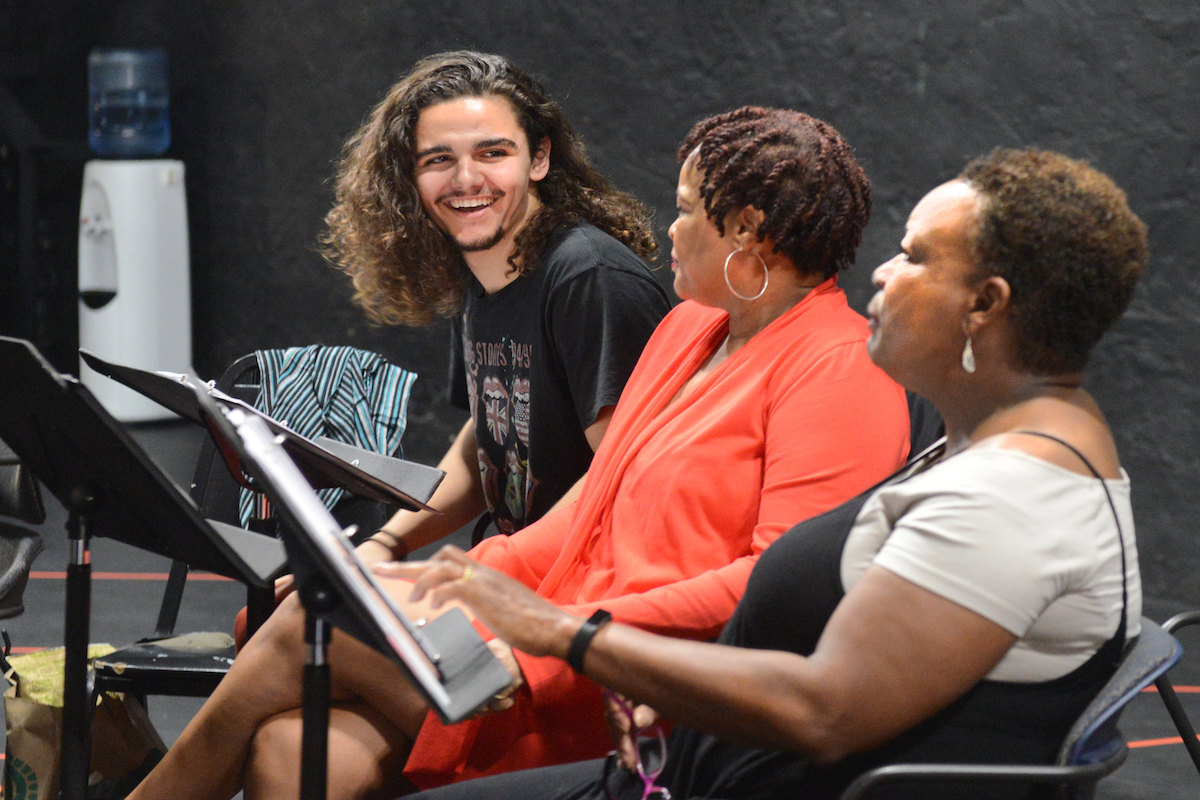 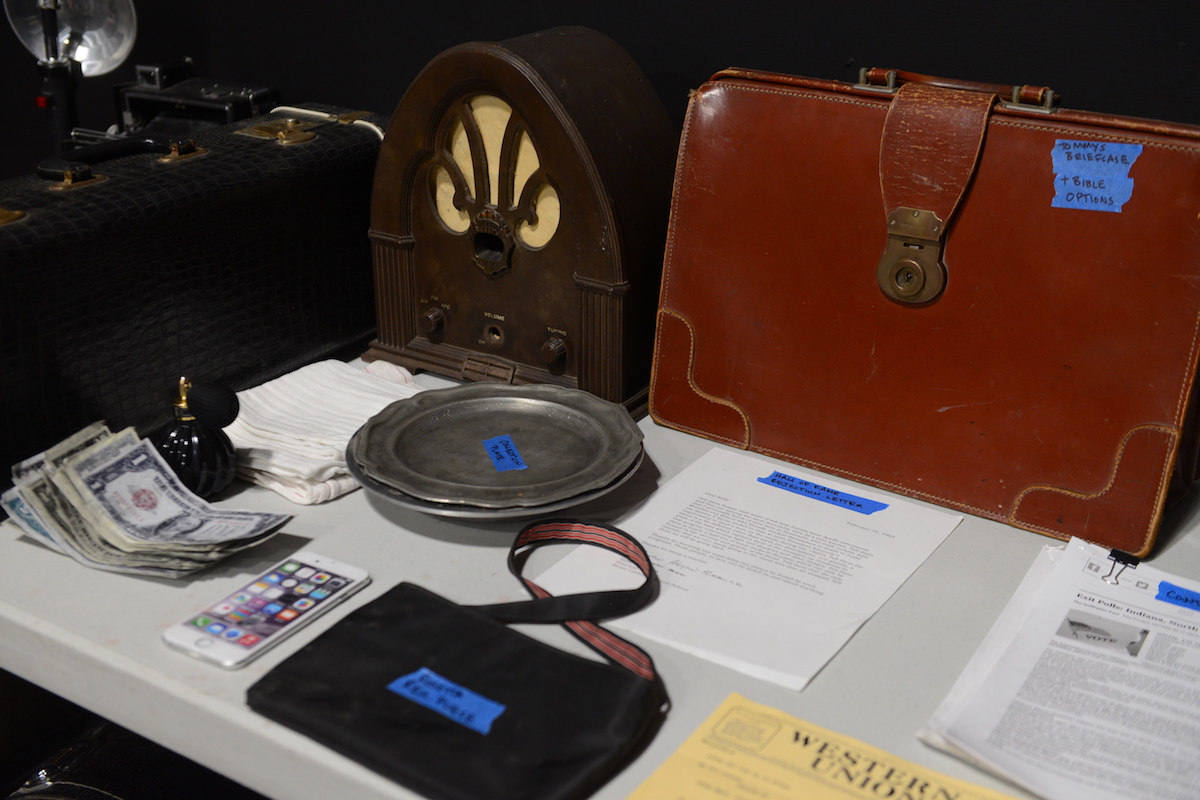 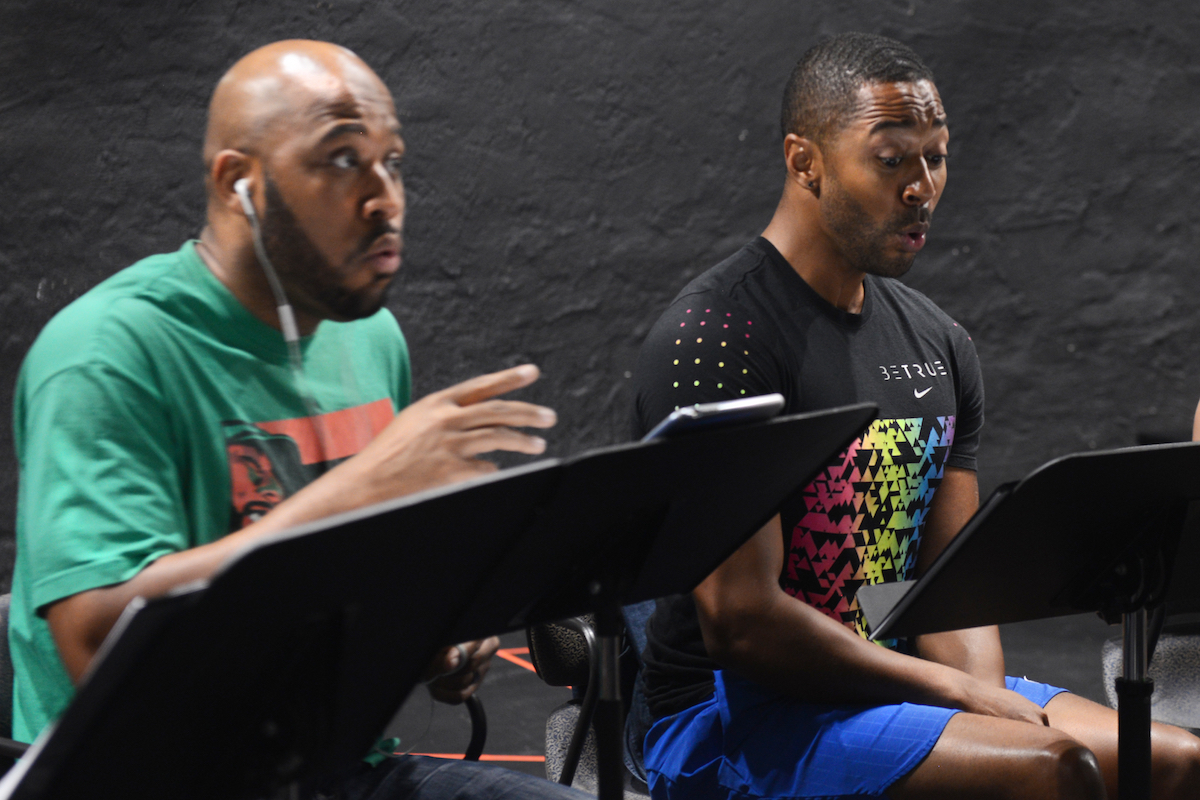 Born in Dayton, Ohio, Logan Charles moved to Nashville at the age of 10 to pursue his music dreams, and was soon recording and touring nationally. Shortly thereafter, he added acting to his repertoire and by age 13 had booked multiple national TV commercials. This led him to Los Angeles where he continued to hone his craft and became a founding member of a pop-punk band that toured globally. Logan is now honored to join the incredibly talented cast of Shout Sister Shout! for his theater debut at the Pasadena Playhouse. He is very grateful to his family, Symington Talent Management, and his agents at CESD for their endless support.

Yvette recently played Lillie Ann in Barbecue at the Geffen Playhouse. In addition, Yvette portrayed Aretha Franklin and Nina Simone in A Night With Janis Joplin at the Pasadena Playhouse and 5th Avenue Theatre. Other credits include: Ella The Musical, Dreamgirls, Play On! (Ovation Award), Once On This Island, Ain’t Misbehavin’, St. Louis Woman, Into The Woods and Sisterella (NAACP Theatre Award). Film: “A Wrinkle In Time,” “Dreamgirls” and “Middle of Nowhere.” She has toured with Whitney Houston, Stevie Wonder, David Foster and Babyface. Education: Berklee College of Music.

Boise Holmes is excited to make his Pasadena Playhouse debut in Shout Sister Shout! A Baltimore native, Boise is an LA-based actor/singer/VO artist/ writer/producer and speaker who has been seen and heard in numerous creative projects. On TV: “Chicago Fire,” “Law and Order: SVU,” “CSI: Miami,” “NCIS,” “30 Rock,” “Black-ish,” “Nobodies,” “Doubt.” Commercial/VO credits include:  McDonalds, Verizon, Toyota, Farcry5 Video Game. Boise spent over 2.5 years playing Mufasa in the German-speaking production of Disney’s The Lion King, as well as Scar in the Hong Kong Company. He is a 1st place winner of the National Shakespeare Competition at Lincoln Center for his portrayal of Othello, and was awarded a full scholarship to study abroad at the Oxford School of Drama where he portrayed MacBeth. Other theatre credits include: Jesus in Jesus Christ Superstar, Walter Lee in Raisin in the Sun, Purlie in Purlie, Jim in Big River, Flyin’ West at ICT (NAACP Theatre Award). He recently originated the role of the soulful Isaac Hayes in the smash-hit musical Heart of Soul (LA/Memphis) as well as starring as the great Duke Ellington in the highly-praised When Jazz had the Blues at The Matrix Theatre. Boise writes/directs/ produces his own one man vignettes which have been seen around the world (including Japan, Monaco, Hong Kong, London and Germany). boiseholmes.com

Armando Yearwood, Jr. is honored to return to Pasadena Playhouse for Shout Sister Shout! Theater works include Seussical: The Musical, Twist: An American Musical, Seven Brides for Seven Brothers, Kiss Me, Kate!, In the Heights National Tour, West Side Story International Tour, and Dame Edna’s Glorious Goodbye Tour. Armando also works at Disney’s California Adventure where he plays Sven the reindeer in Frozen: Live at the Hyperion. You can also see him in the YouTubeRed film “Ghostmates,” as a Bollywood Dancer, and as a dancing football player in the ABC comedy “The Real O’Neals.” Armando would like to thank his friends and family for their continued support. INSTA: @Mando_Jr

Creator, Writer and Director of the 2014 Tony Award nominated production of A Night With Janis Joplin. “Randy Johnson certainly doesn’t lack for ambition or vision, or social conscience. In the strictest sense of the word, he isn’t a theater director – that might be too much of a constricted space for him, although he’s certainly succeeded in almost every medium including; Broadway, Off Broadway, Regional Theatre and the Concert world. If there is a trademark for Randy Johnson’s productions, it’s that they’re going to be nothing that you might expect..” The New York Times. randy-johnson1.com

Cheryl L. West’s plays have been seen in England, off-Broadway, on Broadway (Play On!) and in numerous regional theaters around the country. She has written TV and film projects at Disney, Paramount, MTV Films, Showtime, TNT, HBO, CBS and is the Webby-nominated writer for the original web series “Diary of a Single Mom.” Ms. West is currently working on a pilot for the BET Network and commissions for Seattle’s 5 th Avenue Theater, Chicago Children’s Theater, Minneapolis Children’s theater, Seattle Children’s Theater and Oregon Shakespeare Festival in Ashland. Ms. West is thrilled to celebrate Rosetta Tharpe’s life on stage and can’t wait for the day she is finally inducted into the Rock and Roll Hall of Fame.

Rahn’s depth, passion and artistry are rarely matched in the areas of musical direction, piano and professional performance coaching. He has served as musical director, conductor and pianist for: Play On, Purlie, Blues in the Night, Lady Day at Emerson’s Bar and Grill, The Wiz, Ain’t Misbehavin, Ray (Charles), Play On, Sammy (Davis), Baby It’s You, Breath and Imagination and Kiss Me, Kate, to name a few. A product of extensive classical training having studied under the renowned teacher Nadia Boulangier, Rahn has over 30 years of professional experience having performed, conducted, coached and arranged for such notables as; Aretha Franklin, Freda Payne, Nichelle Nichols, Michael Feinstein, Gladys Knight, Barry White, The Ojays, The Temptations, Wayne Brady, Tina Turner, Ray Charles, Sarah Vaughn, the Philadelphia Philharmonic, and the Clinton Presidential Inaugural Orchestra. Rahn is the recipient of national and international critical acclaim and always in the running for top honors. Hailed as one of the most effective performance coaches in the world, he has also shared his artistic gifts through service as Minister of Music at Christ the King and Faith Lutheran churches in Southern California. As producing director of “The Mystic Knight Recorder,” LA’s leading underground studio, new vistas for world class music and its performance are in constant creation.

Dana Rebecca Woods is happy to be collaborating with Randy Johnson and the wonderful design team assembled for Shout Sister Shout! Her design work includes Single Black Female at Crossroads Theater; In the Red and Brown Water at UC Santa Barbara; Stop Kiss, Above The Fold, Fences, Flying West, The Importance of Being Earnest, and others for the Pasadena Playhouse; Jitney and Fences at South Coast Repertory, Blues in the Night at San Francisco’s Post Street Theater; Train Driver, Heart Song, and others at the Fountain Theater. She has also collaborated with John Sayles on his film “Go For Sisters.” When not designing costumes for stage, film, or TV, Dana creates teaching artist curriculum for afterschool programs.

Pasadena Playhouse: Casa Valentina, Breaking Through, Kiss Me Kate, Under My Skin, ART & Blues for an Alabama Sky. His designs have been seen throughout the U.S., Broadway, Off-Broadway, West-End, Canada, Spain, Edinburgh & Las Vegas. National Tours include Blithe Spirit starring Angela Lansbury, The Who’s Tommy with Alice Ripley, Queen of Spades starring Placido Domingo (Madrid) and Rolling with Laughter at Her Majesty’s Theatre (West-End). Broadway: The Illusionists (Neil Simon & National Tour) Bravo Bernstein, Gotham Glory (Carnegie Hall) and was on the design teams for: PRIMO, Andrew Lloyd Webber’s The Woman in White and the “Radio City Christmas Spectacular.” Jared is principal designer for the USA International Ballet Competitions held every four years. Jared became the youngest member of the United Scenic Artists-Local 829 and serves as a trustee to the executive board. jaslighting.com

Jon’s design work at the Pasadena Playhouse includes Twelve Angry Men and Kiss Me, Kate! He most recently designed for the Geffen Playhouse’s Big Sky, The Country House, Equivocation and Cat on a Hot Tin Roof, as well as Master Class with Tyne Daly at the Vaudeville Theatre in London and Manhattan Theatre Club on Broadway. Other Broadway credits include Neil Simon’s Dinner Party, Terrance McNally’s Master Class, and QED with Alan Alda at Lincoln Center. Center Theatre Group credits include iWitness (L.A. Drama Critics Circle Award), The Flower Drum Song (Ovation Award) and Hughie with Al Pacino. Jon has received eight LADCC Awards, three L.A. Stage Alliance Ovation Awards, and over 60 Drama-Logue, LA Weekly and NAACP Theater awards. Jon also serves as the head of the Sound Design program for the School of Theater at California Institute of the Arts.