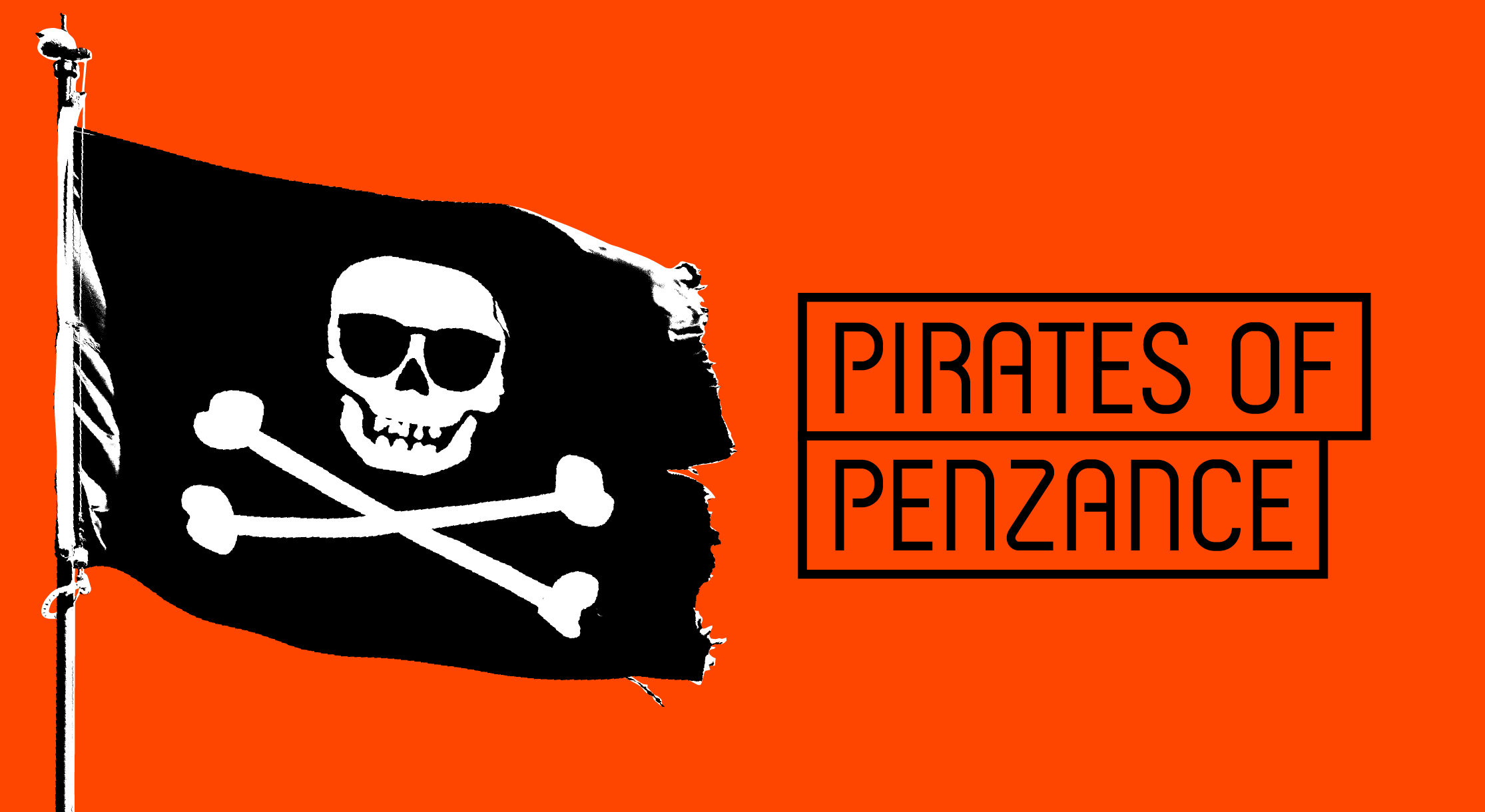 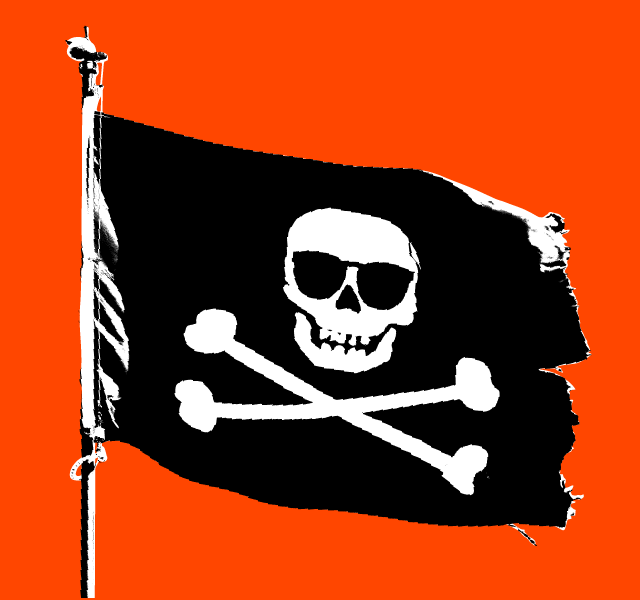 January 23 — February 25
Toss your worries overboard and join playful pirates, dewy-eyed damsels, bumbling bobbies and one very stuffy modern Major-General on stage. Bring your friends and family to experience the biggest beach party of the year–complete with guitars, beach balls, banjos and a tiki bar!  Find your inner pirate as Chicago theater rebels The Hypocrites bring this brilliantly zany adaptation of the Gilbert and Sullivan classic musical to LA for the first time, and you won’t want to miss out on the fun!
View Seatmap

Toss your worries overboard and join playful pirates, dewy-eyed damsels, bumbling bobbies and one very stuffy modern Major-General on stage. Bring your friends and family to experience the biggest beach party of the year–complete with guitars, beach balls, banjos and a tiki bar!  Find your inner pirate as Chicago theater rebels The Hypocrites bring this brilliantly zany adaptation of the Gilbert and Sullivan classic musical to LA for the first time, and you won’t want to miss out on the fun!
View Seatmap

Experience the Playhouse like never before – we will be scuttling the stage backward, flipping the seats sideways, and adding a tiki bar for scallywags to partake.

Please note that tickets in ROW P, SEATS 1 – 160, are all GENERAL ADMISSION located in the promenade. The Promenade experience requires audiences to be mobile throughout the production, with no assigned seating. Sit in a ball pit, hang on a bench, take a seat on the deck, or even visit the tiki bar at any moment during the show. 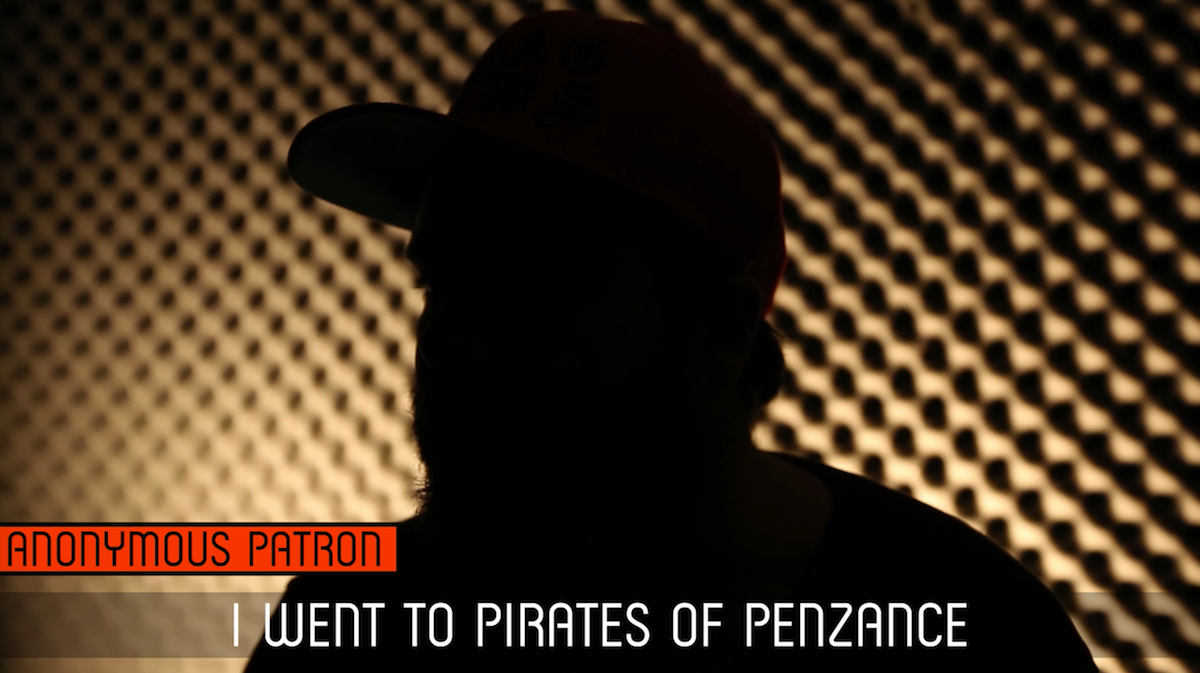 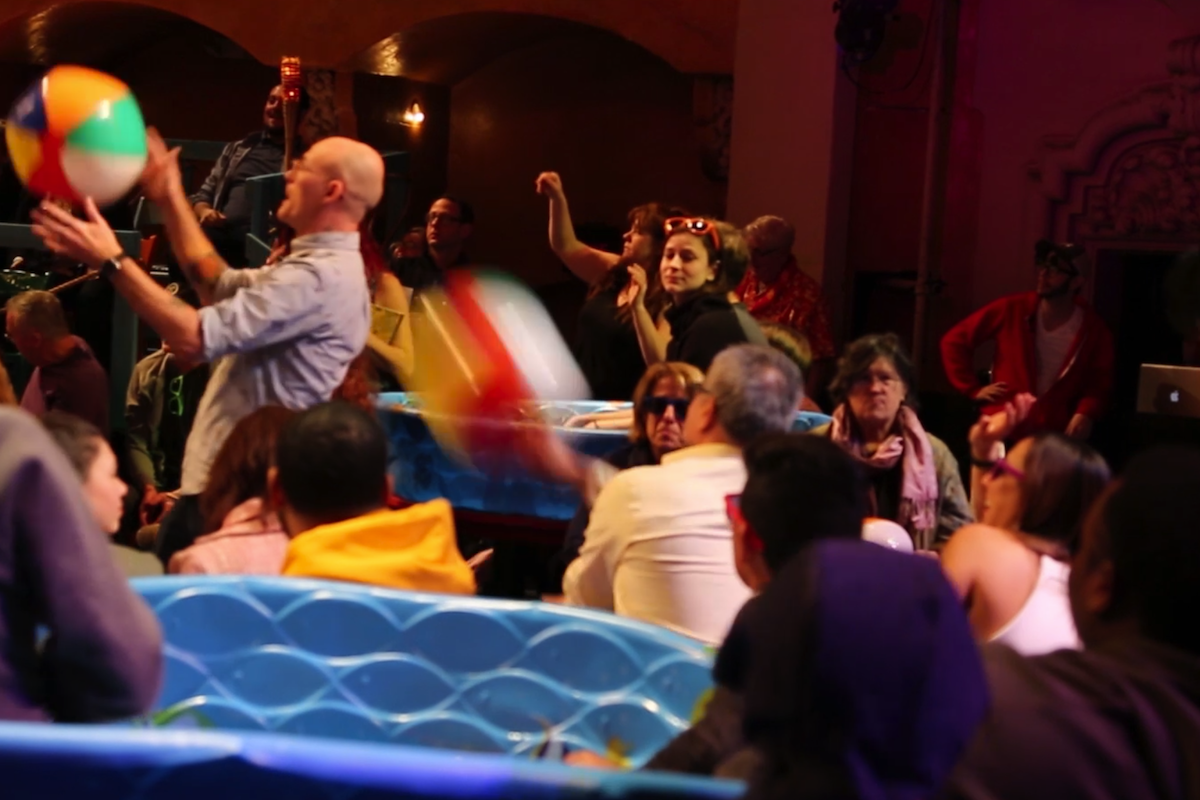 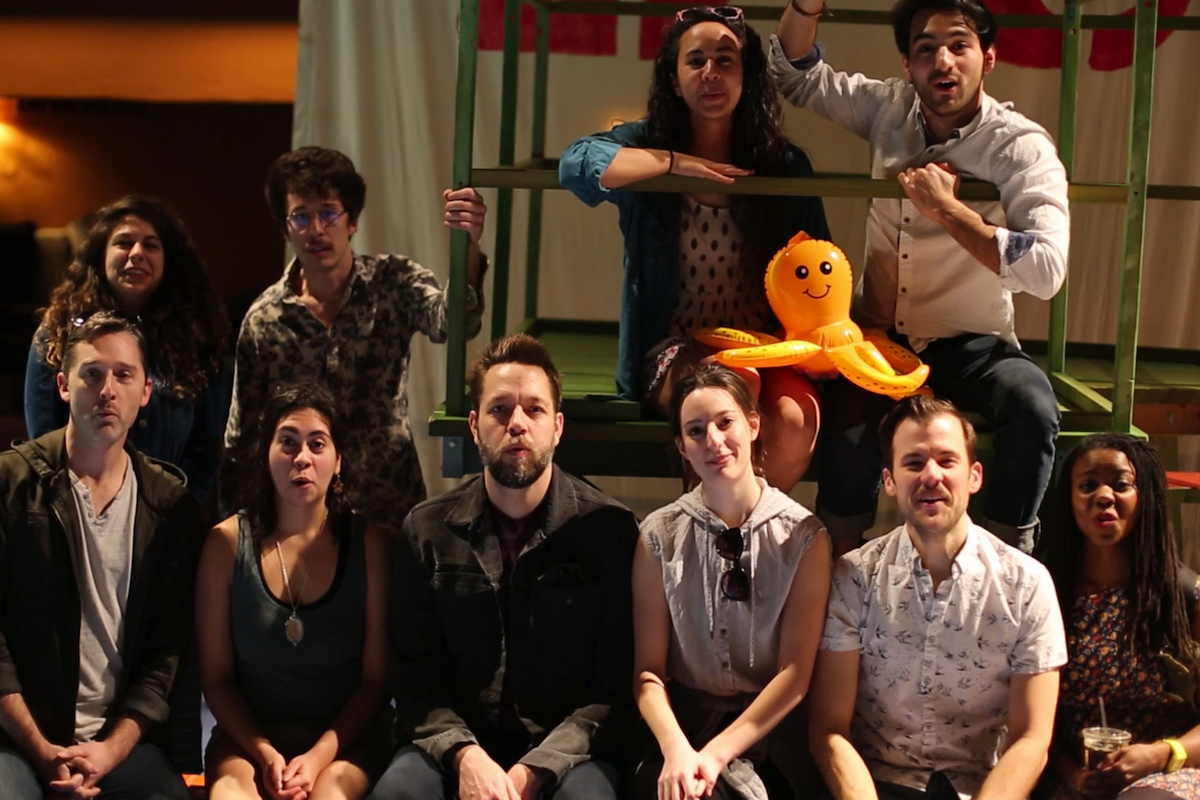 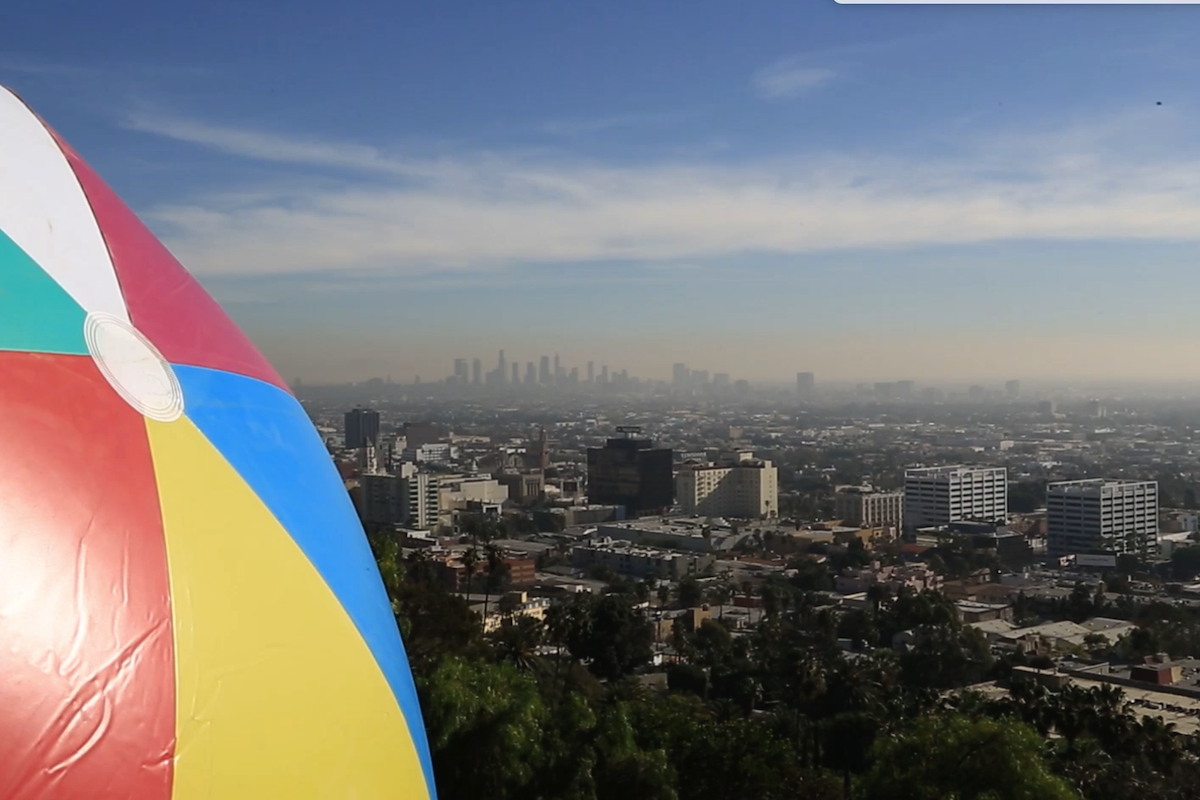 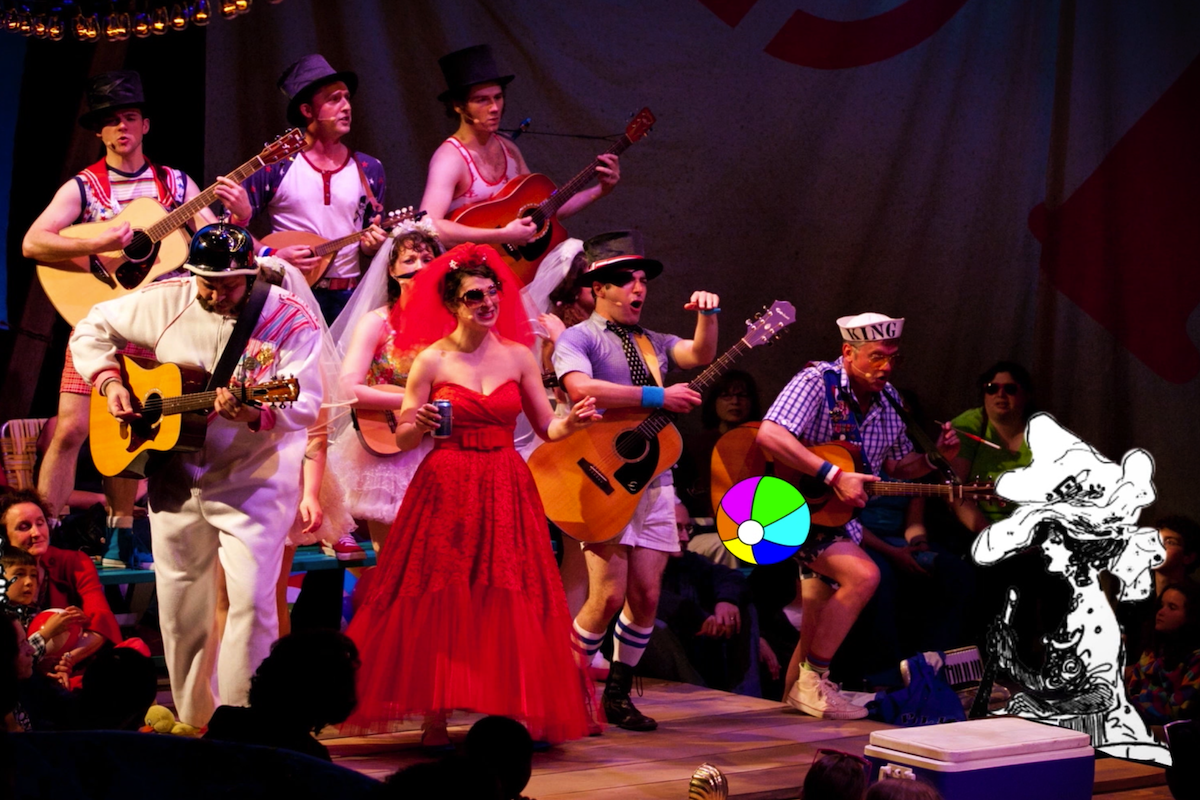 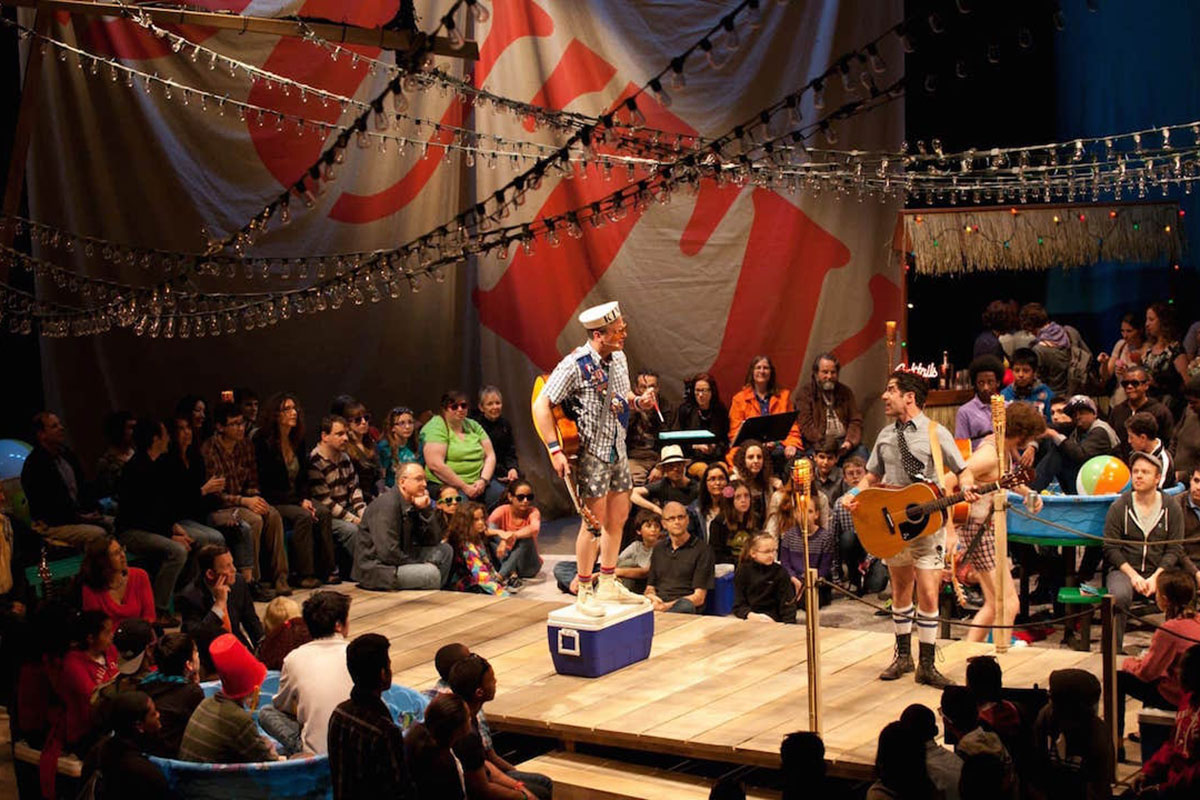 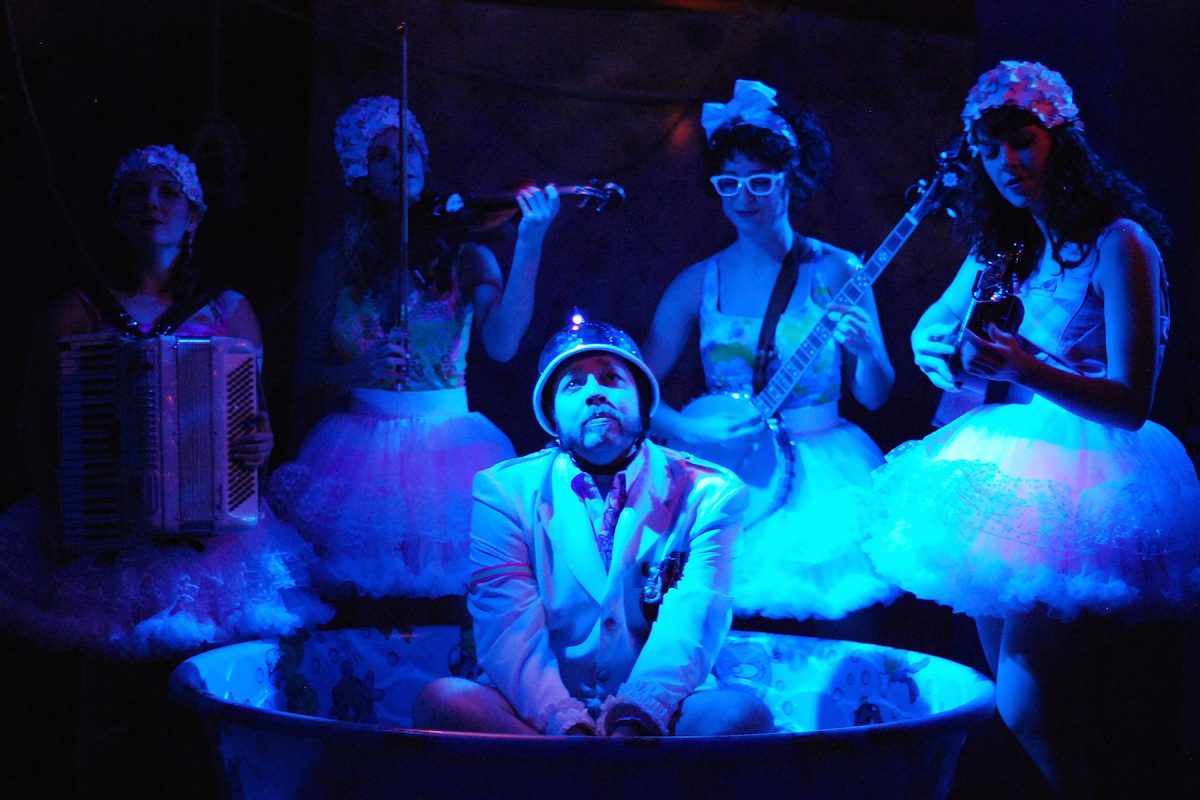 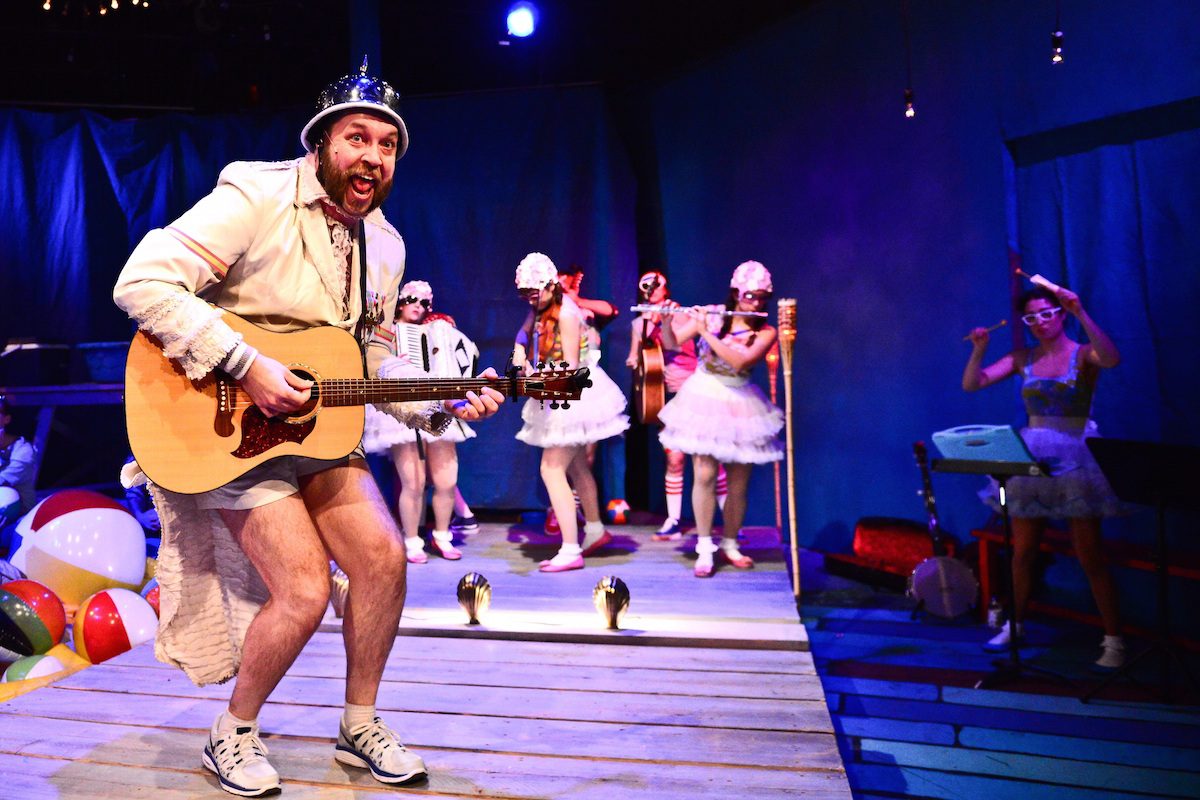 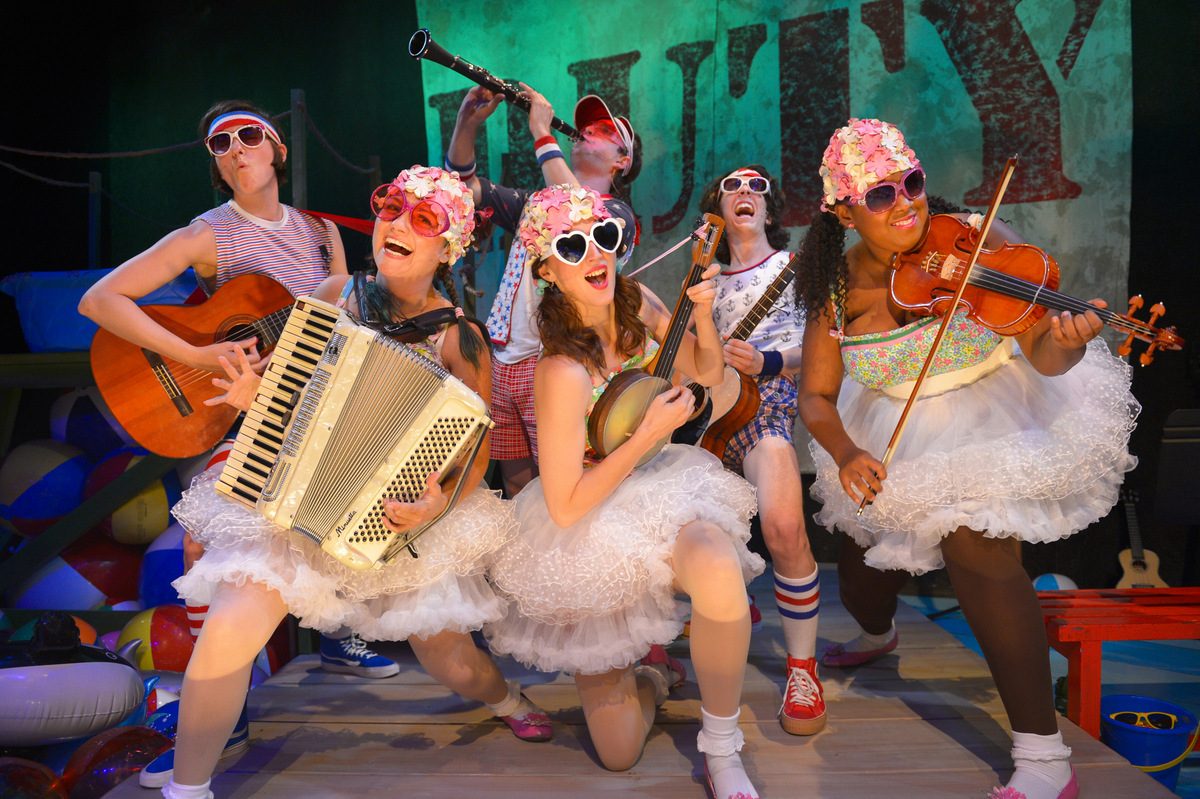 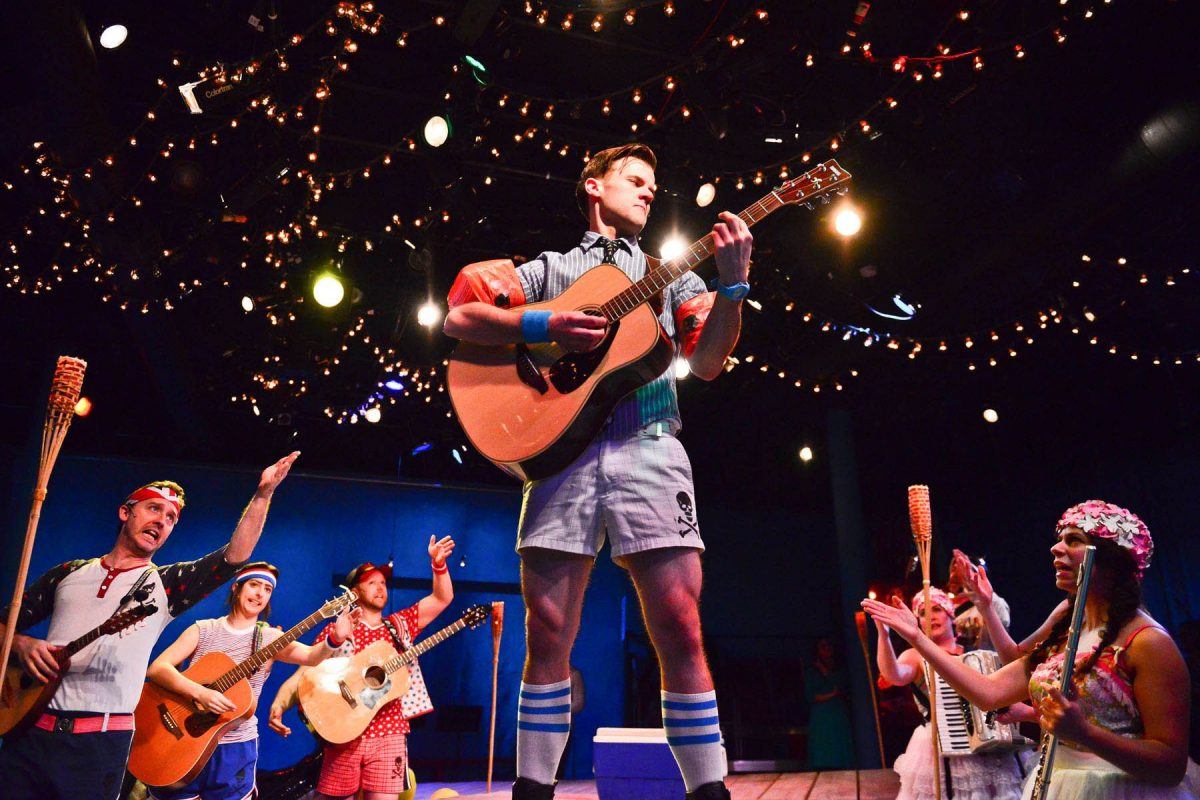 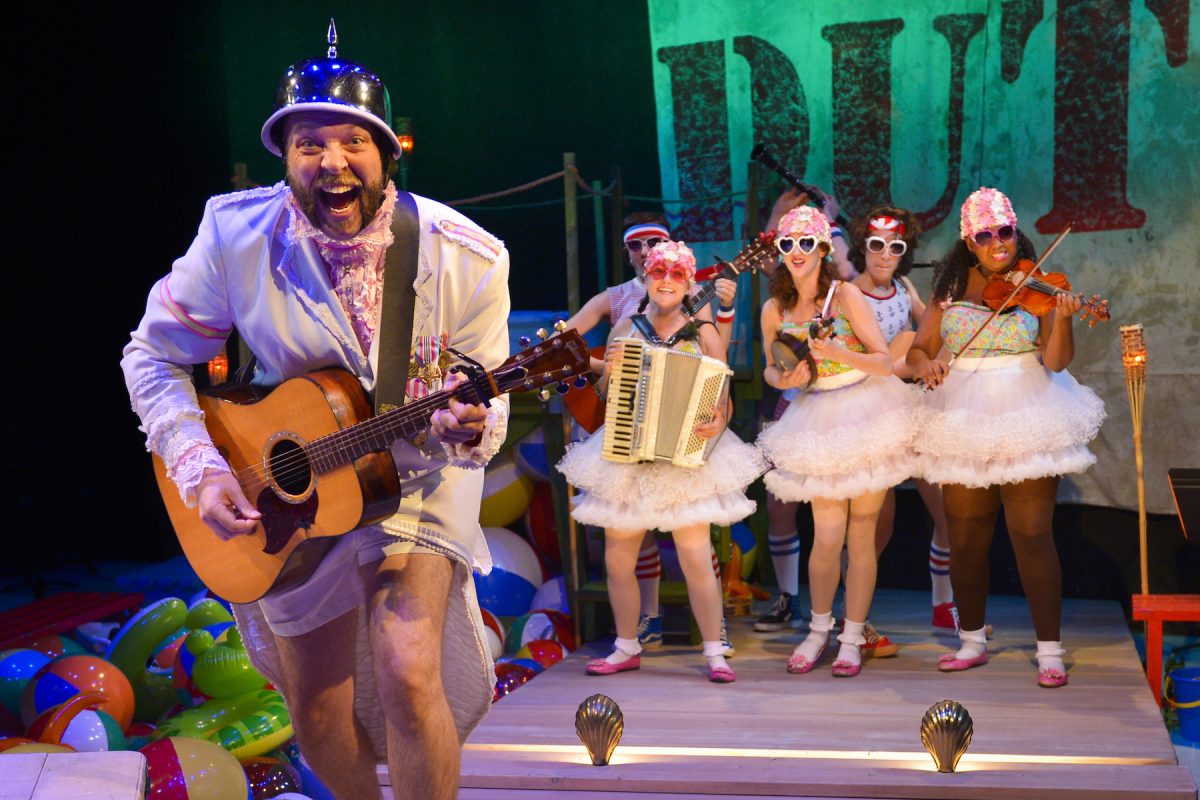 Mario is thrilled to be spending the winter in Sunny Pasadena, far away from Old Chicago. Mario was most recently seen in Pirates of Penzance at NYU Skirball Center, Olney Theatre Center, and Berkeley Repertory Theatre. Some Chicago performance credits include: A Year With Frog and Toad (Chicago Children’s Theatre); Twenty Thousand Leagues Under the Sea (Strawdog Theatre); and Cox and Box (Rose Freeman’s Lesbian Lounge). He’d also like to acknowledge the undying support of his mother, his family, and Kelsey. Please sit in the promenade, thank you for coming!

Read More
Amanda is ecstatic to make her Pasadena Playhouse debut! Regional credits include: Cinderella at the Theater of Potatoes, Pirates of Penzance, and The Mikado (NYU Skirball and Olney Theatre Center); Kitty Hawk (Adrienne Arsht Center); Big Lake, Big City (Lookingglass Theatre Company), As You Like It and Love, Loss, and What I Wore (First Folio Theatre), For the Love Of (Pride Films and Plays), Even Longer And Farther Away (The New Colony), El Stories: The Holiday Train (Waltzing Mechanics), and Generation Sex (Teatro Luna). Love to her stellar cast, Zachary clan, Lissette, Autumn, Ellie and the rest of her tribe.

Tina is so excited to join The Hypocrites once again in Pirates of Penzance after raucous runs at the Skirball Center in NYC and in repertory with The Mikado at Olney Theatre Center. Chicago credits include: The Rembrandt (Steppenwolf Theatre); The Great and Terrible Wizard of Oz (The House Theatre of Chicago); The Tall Girls (Shattered Globe Theatre); and Octagon (Jackalope Theatre). Touring credits include: A Midsummer Night’s Dream, Julius Caesar, and A Tale of Two Cities (National Players). Tina is a proud graduate of the University of Michigan and the School at Steppenwolf.

Read More
Dana is thrilled to make her Pasadena Playhouse debut in Pirates of Penzance. Recent credits include: Pirates of Penzance (NYU Skirball Center); Gilbert & Sullivan Unplugged (54 Below); Kitty Hawk (Adrienne Arsht Center, in collaboration with The House); The Miraculous Journey of Edward Tulane (People’s Light Theatre); One Hundred Dresses (Chicago Children’s Theatre); The Mikado and Pirates of Penzance in Rep (Olney Theatre Center and American Repertory Theatre); H.M.S. Pinafore (American Repertory Theatre and Actors Theatre of Louisville), All Our Tragic, All Our Tragic (Remount), and Cabaret with The Hypocrites and was recently on NBC’s “Chicago P.D.” Thanks to friends, family and bubs for the support.

Read More
Doug is elated to make his West Coast debut at Pasadena Playhouse! A multi-instrumentalist and ensemble member of The Hypocrites, he has toured regionally with their Gilbert & Sullivan adaptations to Actors Theatre of Louisville, and American Repertory Theater in Cambridge, MA. Chicago credits: Million Dollar Quartet and Route 66 (Paramount Theatre); Crazy for You (Drury Lane Theatre); I Love Lucy Live on Stage (Broadway Playhouse). Over the past 4 years he has toured the Midwest as bassist with the band, Cowboy Jukebox. Thank you for my world, Leah and Perry!

Shawn has been with The Hypocrites Gilbert & Sullivan project since its beginning in 2010, traveling with the group to: American Repertory Theatre, Actors Theatre of Louisville, Berkeley Repertory Theatre, Olney Theatre Center and the Skirball Center in New York City. Other regional credits include: Hamlet, Henri IV, The Seagull (Michigan Shakespeare Festival); Death & Harry Houdini and The Sparrow (Adrienne Arsht Center, Miami). Chicago credits include: Death & Harry Houdini, Cyrano, Thieves Like Us (The House Theatre); Theatrical Essays (Steppenwolf Theatre Company); A Year With Frog and Toad, and Frederick (Chicago Children’s Theatre).

Lauren is making her Pasadena Playhouse debut. She is an American actress, comedy writer, and multi-instrumentalist, most recently seen performing at Feinstein’s/54 Below in NYC. Regional credits: American Repertory Theatre, Actors Theatre of Louisville, Olney Theatre Center. Lauren is ensemble member with The Hypocrites and has appeared in All Our Tragic (Equity Jeff Award), Pirates of Penzance, The Mikado, H.M.S. Pinafore, Johanna Faustus, among others. Other Chicago credits include: A Red Orchid Theatre, Steppenwolf Garage, Trap Door Theatre. Lauren is currently starring as Woods in “Chicago H.R.” a comedy web series produced by The Second City training center. Online: www.laurenvogel.org

Read More
Sean would like to thank you for spending your time and money on live theater. He is the Artistic Director of The Hypocrites and has directed over 100 pieces of theater. He was a Fellow at the Radcliffe Institute for Advanced Study at Harvard. He’s a Creative Capital Awardee, and has received the Helen Coburn and Tim Meier Award. His directing work has been seen at American Repertory Theater, Actors’ Theatre of Louisville, Berkeley Rep, Chicago Shakespeare, Goodman Theatre, Utah Shakespeare Festival, Shakespeare Festival St. Louis, Court Theatre, Milwaukee Rep, Steppenwolf for Young Audiences, Chicago Children’s Theatre and at the Oregon Shakespeare Festival. Have a great day.

Read More
Katie is a New York-based choreographer, whose credits with The Hypocrites include Adding Machine, American Idiot, Pirates of Penzance, The Mikado, and Into the Woods. Other Chicago credits include: Lookingglass, Court Theatre, Timeline, Sideshow, The New Colony, Chicago Shakespeare Theatre, Northwestern University, and The Inconvenience. East coast credits include: Goodspeed, EST, Cherry Lane and Asolo Repertory. Broadway associate: Once, American Psycho, and Amelie; Off-Broadway associate: NYTW, The Vineyard, and The Public. Katie was also the Associate Director of Close to You in London (Chocolate Factory, West End), and is a proud graduate of Northwestern University.

Read More
Andra is thrilled to make her Pasadena Playhouse debut. Regional: Oregon Shakespeare Festival, A.R.T. in Cambridge, Brooklyn Academy of Music, Actors Theatre of Louisville, Berkeley Rep, Skirball Center at NYU, and Olney Theatre Center in Maryland. Chicago: The Goodman Theatre, Theater Wit, Chicago Children’s Theatre, The Hypocrites, Porchlight Music Theatre, and many others. Andra is the Resident Music Director for Firebrand Theatre in Chicago, where she recently music directed their hit production of LIZZIE. Andra is also a faculty member at Columbia College Chicago, where she has taught musical theatre performance courses since 2008.

Read More
Pasadena Playhouse debut. Pirates has previously dropped anchor at the Skirball Center (NYC), Berkeley Rep, Actors Theatre of Louisville, Olney Theatre Center, American Repertory Theatre, and the origi- nal production for The Hypocrites in Chicago. Other Chicago credits include: The Goodman, Chicago Shakespeare, and Northlight, Court, among others. Regional credits include: Arizona Theatre Company, Cleveland Play House, Milwaukee Rep, and the off-Broadway run of Mistakes Were Made (Barrow Street Theatre, NYC). Other shows for The Hypocrites have included Frankenstein, The Hairy Ape, NoExit, Woyzeck, All Our Tragic, Mikado, H.M.S. Pinafore, and the upcoming Aristophanesathon. Online: www.tomburch.com

Read More
Recent projects include: You Got Older (Steppenwolf Theatre); In The Next Room (Timeline Theatre Company); Angels in America, Airness and The 39 Steps (Actors Theatre of Louisville); Earthquakes in London, Motortown (Steep Theatre); The Yeomen of the Guard (Oregon Shakespeare Festival); Our Town (Almeida Theatre, Kansas City Repertory, Huntington, Broad Stage, Barrow Street Theatre, The Hypocrites); All Our Tragic, Pirates of Penzance, The Mikado, H.M.S. Pinafore, (The Hypocrites). She is a graduate of Northwestern University, a community member of The Hypocrites, an artistic associate with Lookingglass and an associate compa- ny member of Steep Theatre. Online: alisonsiple.com

Read More
Kevin is excited to make his Pasadena Playhouse debut with The Hypocrites’ Pirates of Penzance, a show he has worked on from the very first production, in various capacities. Regional credits include A.C.T., A.R.T., The Seattle Rep, The Southern Rep, The Arscht Center, Actors Theater of Louisville, The New Orleans Shakespeare Festival; Chicago credits include Steppenwolf, Chicago Shakespeare, The House, Lookingglass, and The Court, amongst others. As a musician he has recorded and toured extensively with Andrew Bird, Kelly Hogan, Jimbo Mathus and others.

Read More
Maria is excited that The Hypocrites’ production of Pirates of Penzance is being shared with another group of people. Maria is currently the Props and Scenic Art Director at Lyric Opera of Chicago. Before that she was the props designer at Lookingglass Theatre for several years while working on Hypocrites’ productions. Some of her other favorite people that she has made props for are Steep Theatre, The Hypocrites, Chicago Opera Theater, and many other Chicago Storefront Theaters. Maria is a proud member of S.P.A.M., the Society of Prop Artisans and Masters, not the canned meat product.

Party with the pirates and keep the beach party boat afloat! Trejo’s On Stage Tiki bar is open for an extra hour after every performance from Thu – Sun, excluding matinees.

Tiki Tuesday
On Tuesdays, ticket holders are invited to come early and explore The Loft transformed into a Tiki Lounge. There will be beach balls, tropical music and complimentary Pirate-style rum drinks, generously donated by Stark Spirits.