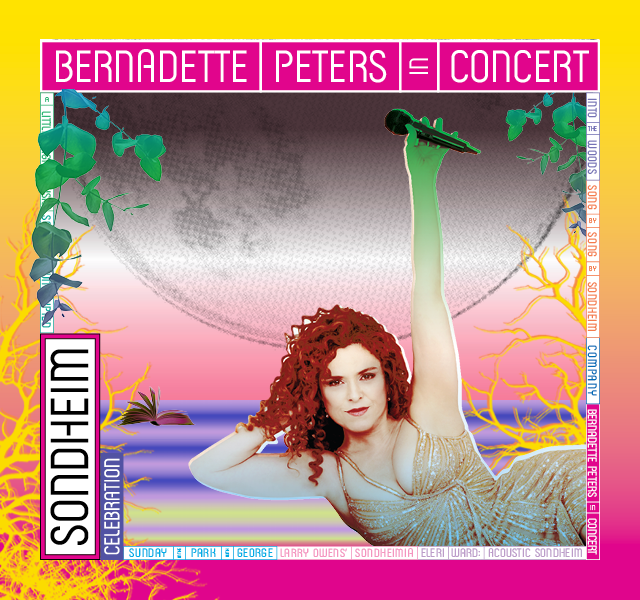 Music and Lyrics by Stephen Sondheim 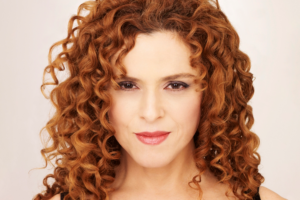 Throughout her illustrious career, Bernadette Peters has dazzled audiences and critics with her performances on stage, film and television, in concert, and on recordings. She has garnered numerous accolades including three Tony Awards, a Golden Globe, three Emmy and four Grammy Award nominations and a star on the Hollywood Walk of Fame.

Best known for her work on stage and one of Broadway’s most critically acclaimed performers, Bernadette recently starred on Broadway as Dolly Gallagher Levi in the hit musical, Hello, Dolly!. Prior to that, she starred in City Center’s Encores! Production, A Bed and a Chair: A New York Love Affair featuring the music of Stephen Sondheim and orchestrations by Wynton Marsalis and on Broadway, in Stephen Sondheim’s A Little Night Music and Follies.

Peters garnered both the Tony Award and Drama Desk Award for her performance in the Andrew Lloyd Webber musical, Song and Dance. She also won a Tony Award for her performance in Annie Get Your Gun. She received Tony nominations for her outstanding performances in Sam Mendes’ critically acclaimed revival of Gypsy, in Neil Simon’s The Goodbye Girl, Stephen Sondheim’s Pulitzer Prize-winning musical Sunday in the Park with George, the Jerry Herman/Gower Champion ode to the movies, Mack and Mabel, and the Leonard Bernstein/Comden and Green musical On The Town. In addition to these honors, Peters earned a Drama Desk nomination for her unforgettable portrayal of the Witch in Stephen Sondheim’s Into the Woods.

She also enjoys a career which boasts an impressive list of television credits, including guest-starring on the NBC-TV series, Zoey’s Extraordinary Playlist for which she earned an Emmy nomination. The popular series was made into a TV movie musical titled Zoey’s Extraordinary Christmas for The Roku Channel. Other recent TV appearances include The CW’s Katy Keene; CBS All Access’ The Good Fight; and Amazon Prime’s Golden Globe winning series, Mozart in the Jungle. She recently completed production on the new Apple TV series, High Desert, scheduled to be released this Summer.

Other television credits include NBC-TV’s Smash, ABC-TV’s Grey’s Anatomy and Ugly Betty. In addition to starring in the Lifetime TV movie Living Proof, Peters has lit up the silver screen in over 30 films throughout her distinguished career. She received a Golden Globe Award for her memorable performance in Pennies From Heaven. Other film credits include The Jerk, The Longest Yard, Silent Movie, Annie, Pink Cadillac, Slaves of New York, Woody Allen’s Alice, Impromptu, It Runs in the Family, Coming Up Roses, The Broken Hearts Gallery and most recently, a surprise appearance in the popular Jonathan Larson biopic, tick, tick…BOOM!

Peters devotes her time and talents to numerous events that benefit Broadway Cares/Equity Fights AIDS. Her “pet project” Broadway Barks, co-founded with Mary Tyler Moore, is an annual, star-studded dog and cat adoption event that benefits shelter animals in the New York City area. She is a New York Times best-selling author who has penned three children’s books: Broadway Barks, Stella is a Star, and Stella and Charlie: Friends Forever. All of her proceeds from the sale of these books benefit Broadway Barks. Peters resides in New York and Los Angeles with her rescue dogs, Charlie and Rosalia.

Guests who enjoy open captioning may request to be seated in view of a video screen with text descriptions synchronized to the onstage action designed for people who are deaf or hard of hearing.

The Open Captioned performance of Bernadette Peters in Concert will be on Sunday, June 11, 2023 at 2:00 PM.

Tickets start at $39 and will be available at a later date. To be the first to know about on-sale dates, you can subscribe to our mailing list. Pasadena Playhouse Members can book tickets before the general public – join today to take advantage of advance booking!

The only way to guarantee the best seats at the best prices is to become a Member. As a Pasadena Playhouse Member, you get priority access to book the best available seats and enjoy discounts you can share with your friends.

Bernadette Peters in Concert is made possible by the generous support of Honorary Producers Brad & Pamela King.